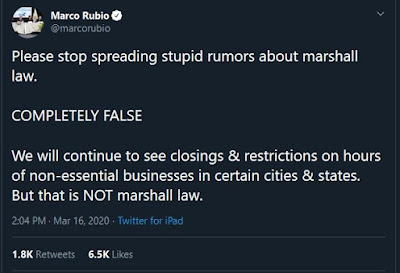 Not once but twice in the same tweet referencing "marshall law" rather than "martial law". Once in a tweet could be chalked up to autocorrect, but twice means he intended to spell "marshall" because he doesn't even know what the term he is trying to use means. He did the same thing on Facebook and it has been up for two hours. At least on Facebook you can edit your posts.

Maybe he should refrain from calling anyone or anything else stupid.

We are ruled by imbeciles, lunatics and children.
Posted by Arthur Sido at 12:11 PM