This is a little unusual....

Not the gunfire at a party was unusual but who was doing the shooting....

At least one person was killed and 17 people were injured when gunfire erupted late Saturday following a fight at a party in Cleveland, Ohio, attended by multiple motorcycle clubs, police said.

It reminds me of the 2015 biker gang shootout in Waco, Texas (what is with that place?) with 9 dead and 18 wounded. This shootout isn't getting much play, lots of bad news to cover instead. Biker gangs may look rough and tough but they don't seem to gun each other down all that often, Sons of Anarchy notwithstanding. Most of the guys I know that own Harleys are fat, middle-aged professional guys who like to LARP on warm weekends. Who else can afford a Harley?

After a fight at a house party in the 900 block of East 79th Street, people moved out in front of the house. A gray Dodge Charger then pulled in front of the building, and someone starting shooting at the group before fleeing the area.

A fight at a house party. You don't say? Who could it be now? I wonder what the neighborhood is like....

The shooting happened near Hirsch Metropolitan High School, listed as a "Level 2 Intensive Support" school. What does the school profile tell us? 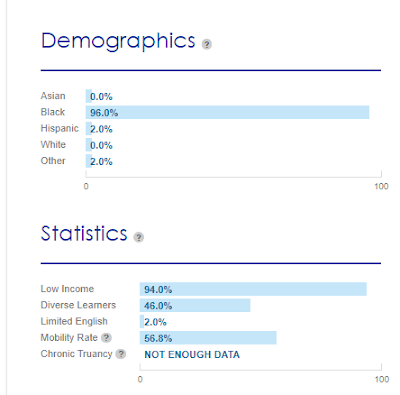 A school that is 96% black and 0.0% white? Based on that and the names of the businesses and churches in the area, I am guess this is a very "diverse" area. I have trouble wrapping my mind around the idea of a high school in America that is 0.0% white but that will be more and more common. Anyway, pretty sure we can narrow down the victims and the perps without much trouble,

Seven people were wounded plus the two geniuses doing the shooting managed to crash their car and were hospitalized and are now in custody. Derp.