Last February, before it was apparent that the Democrats had lost control of the madhouse and Bernie Sanders might win their nomination, I posted about the super efficiency of the U.S. Postal Service sending a package from Ohio to Pittsburgh to Detroit back to Pittsburgh back to Detroit before finally making it to Indiana: The People That Would Run The Green New Deal

In general most of the stuff I order comes via UPS or FedEx. Sometimes UPS takes it to my local post office and it gets delivered without a hitch. But on the 17th of February I ordered some coffee from the good folks at Black Rifle Coffee and while it was a special deal for "free" shipping, they sent it via the Postal Service and that is where things went wrong. It took a week to ship for some reason but then this happened. 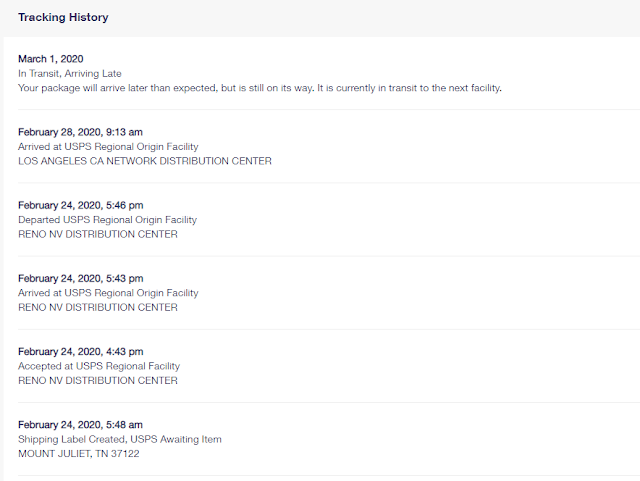 So they don't know where my package is, they have no idea when it will arrive but they are 100% sure it will still be delivered. Whether that delivery happens in 2020 or 2021 or later? Don't know. Rest assured, it is coming!

It was only in Reno, NV for a day before allegedly departing on the 24th but then it was four days before it "arrived" in Los Angeles. It is about a 7 1/2 hour drive from Reno to L.A. but our government can do a 7 hour trip in four days! So what happened from 2/28 to today? Don't know. All they know is that the package is somewhere on the way to "the next facility", which might very well be in Honolulu.

While I can appreciate Black Rifle Coffee Company saving a buck on shipping, do you really want to place your customer's orders in the hands of the least efficient organization known to mankind? On a related note, do we really want to put the same people who can't deliver a box of coffee in charge of most of our economy?
Posted by Arthur Sido at 9:23 AM