For decades now, the northwest and especially places like Montana and Idaho, was the location of choice for doomsday preppers, race realists of all stripes and anyone expecting things to fall apart. More recently Appalachia has been getting a lot of attention as a a hard to crack nut for the government. What I don't get is why Alaska rarely gets mentioned

I have never been to Alaska although I would love to go but it seems like a logical choice. It is physically remote from the mainland, sharing most of it's 1,500 mile land border with the Yukon Territory, a vast Canadian territory of 474,000 square miles with only around 40,000 people, giving it a population density of around one person for every five square miles. Alaska itself is very sparsely populated, with only around 750,000 people in the largest state in the Union, a density of around 1.25/square mile and most of that concentrated in Anchorage and a few other "cities".

To say that Alaska is vast is an understatement. If you overlay Alaska on a map of the U.S., this is what it looks like: 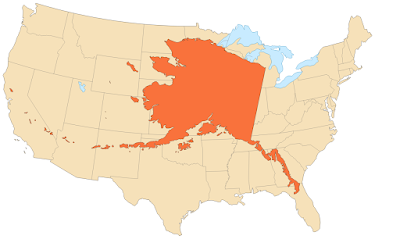 Most of us are used to flat maps focused on the contiguous 48 states with a tiny Alaska and Hawaii off to the side. So yeah, Alaska is big, like over half a million square miles (571,951) big. By comparison, Texas is "only" 261,797 square miles making Alaska more than twice the size of Texas and Texas is home to 29 million people. That means that Alaska, a state twice as big, has around 2.5% of the population of Texas.

Sure things are hard to get in Alaska and I doubt you can get two day shipping from Amazon in the more remote cities. Yes, there are more men than women by a significant margin but that gap is rapidly shrinking and is almost gone at this point. The weather can be pretty extreme although in the south near Anchorage the weather isn't any worse than it is here in Indiana. The weird daylight would take some getting used to and the Eskimo and Indian populations might be a challenging cultural barrier (I have no idea if that is the case). But when SHTF, if you know how to fish and hunt, you can probably forage sufficient protein and being smart and stockpiling vegetables during the summer should be enough to get anyone through the winter.

While there is one smaller city (Anchorage) and some military bases including Joint Base Elmendorf-Richardson, home to several significant Air Force and Army units, most of Alaska is pretty much empty. If you are looking for a place to ride out the Boogaloo, Alaska would seem to be a great choice.

Maybe it is just too remote and rugged, too far removed from civilization and too hard to get supplies. While I can get a firearm shipped to my local Cabelas in just a 5-8 days, their website says it takes 15-18 days to get one delivered to the Anchorage store. So yes, it takes longer and a little more planning in Alaska but that should be kind of the point if you are planning on a significant collapse of civil order.

I think the big barrier is that most of us aren't ready to evac just yet. Moving to Alaska means being very remote from your family. It isn't much of an exaggeration to say that it would be easier to get from Europe to much of America than it would be to get from Alaska to the same destination. Flying from Anchorage to New York is almost 12 hours on the shortest flight I could find, although it was less than $400 over a weekend which really surprised me. It is next to impossible to get a job lined up that far away without a ton of travel. So unless you have cash in hand to buy a place and keep you solvent until you can get some income flowing in, Alaska is a difficult place to move to.

Still, it is worth considering. If things get as bad as I think they might in the worst case scenario, there are few places as remote as Alaska.
Posted by Arthur Sido at 3:17 PM