One of the biggest barriers to a widespread crackdown on gun rights up to and including confiscation is that American law enforcement officers at the state and especially local level in most states are not going to be down with the program. Most are politically conservative, which makes sense since the Left craps on cops all the time. Plus most local and state law enforcement officers live in the same communities they would need to be confiscating guns from and there are some pretty obvious implications to doing that. Besides, most cops have their hands full with actual criminals and don't need any extra work trying to seize firearms from people who know how to shoot.

Some have suggested that the Feds will use foreign mercenaries to carry out their program. This is a plot line in Matt Bracken's Enemies Foreign and Domestic book series. It might seem far-fetched but is it?

A tip of the hat to Daisy Luther at Organic Prepper for this article: The UN Is Hiring English-Speaking DISARMAMENT OFFICERS in New York.

When I saw the headline it was at a squirrelly looking website so I followed the link to Daisy's site which I am more familiar with but it still seemed a little off so I went to the UN website and checked the job postings for New York and yep, there it is. The link is good as of the afternoon of 1/1/20, screenshot below is mine. 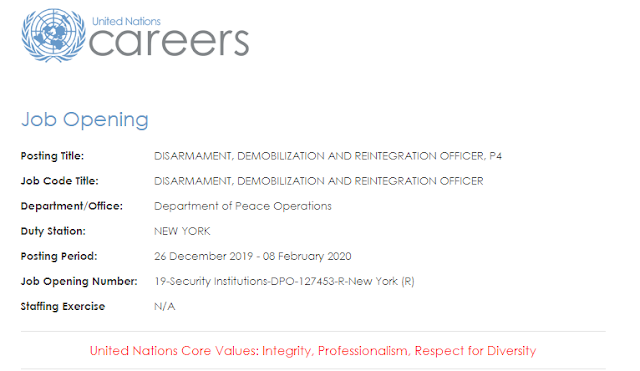 So what is a "disarmament officer"?

I am not really sure. It looks like a leadership position in the UN "peacekeeping" division. You know, the same "peacekeepers" that spread cholera in Haiti and are apparently raping young Haitian girls with impunity as part of their "mission", a situation that is not unique to Haiti. When I was in Haiti there were UN "peacekeeping" troops that mostly seemed to be directing traffic. But as Daisy points out, a few rather ominous lines appear in the job description....

Seven years working in some third world paramilitary service. Huh, that seems like a reasonable qualification and definitely the kind of people we want moving to the U.S.. Then the kicker.

Maybe that is perfectly innocent, after all this is a leadership job at the UN so speaking English makes sense. If I thought the UN was an above reproach international body, maybe this is no big deal. But I don't think that way. Having a job listed as "disarmament" stationed in New York with seven years of military or paramilitary experience, in a political environment where gun control is the single biggest flashpoint in the U.S. right now? That sets off the old alarm bells.

We already have had UN observers "monitoring" U.S. elections:

Also from 2016, a petition from far-left agitators MoveOn for UN observers to watch our elections: Appeal for UN election observers to oversee the United States elections of 2016

In 2012: International monitors at US polling spots draw criticism from voter fraud groups

United Nations-affiliated election monitors from Europe and central Asia will be at polling places around the U.S. looking for voter suppression activities by conservative groups, a concern raised by civil rights groups during a meeting this week. The intervention has drawn criticism from a prominent conservative-leaning group combating election fraud.

Notice they were looking for the phantom "voter suppression activities" from conservatives, rather than the glowering thugs from radical black groups that actually were at polling places. According to that article, the observers were from noted free and fair nations like Kazakhstan and Ukraine. Huh, imagine Ukrainians observing our elections when Joe Biden was on the ticket. Weird.

Again, maybe this is innocent. Maybe not. But here is something for our overlords to keep in mind when it comes to having UN "disarmament" officers.

Most Americans would have a very difficult time opening fire on American law enforcement.

A foreign guy in a blue helmet coming to take my guns?