If you aren't paying attention to the "impeachment" trial, and shame on you if you are, you have missed some earth-shattering boredom and nonsense.

On the other hand, there have been a few interesting moments in the middle of the drudgery that has most of the Senate and virtually all of the country bored to tears. Here is one such moment from the bug-eyed fruitcake Adam Schiff....


Adam Schiff should be selling used cars instead of making laws and presiding over what should be serious events. Here is the key line from Schiff-for-brains:

“The President's misconduct cannot be decided at the ballot box, for we cannot be assured that the vote will be fairly won”

Reread that statement. Adam Schiff is presenting a no-win scenario here. Either Trump is removed from office or the 2020 election will be illegitimate. The classic "heads I win, tails you lose" scam.

Most well-meaning, regular Americans think that the "impeachment" is really about some sort of serious issue, one they don't understand but still think is super serious because the media is talking about it.

What they don't understand is that this was never about an impeachable offense and no one ever thought Trump was going to be removed from office. To remove Trump would require a bunch of Republican Senators, actual Republicans and not just people like Mitt Romney, to vote to remove the sitting President from their own party. While many of them would if there was an actual crime involved, in the absence of one it is not going to happen. Pelosi knew this, Schumer knows this. They are going ahead with this farce for two main and one minor reason.

First, it is distracting Trump. Trump could get a lot of stuff done if he would spend less time on Twitter screaming about how unfair the "impeachment" has been. Any shiny object that keeps his attention focused on silly crap means he doesn't decide to end birthright citizenship via executive order on a whim one afternoon. Trump thinks he is savvy and shrewd but the Democrats have had him chasing his tail for three years now.

Second, it is setting the stage to declare a re-election of Trump illegitimate. While I still think Trump loses for demographic reasons, the Democrats are getting worried and given their clown car of candidates, I can understand why. People are starting to seriously talk about a man born a few months before Pearl Harbor and an avowed socialist being the nominee. Things are that desperate in the Democrat Party that Bernie Sanders is starting to look like the least crazy nominee.

Let that sink in. 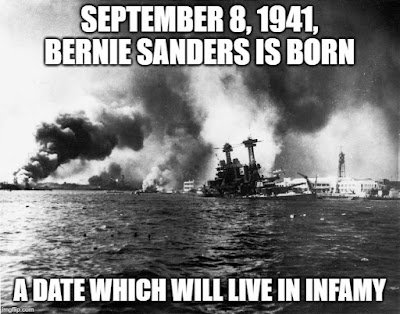 So the leadership is already setting the stage to deal with a second term of Trump by declaring his election illegitimate before the votes are even cast and preparing for an endless series of "impeachments" for the next four years.

The third reason is less important but still real, and that is the Democrats trying to play a balancing act with the most rabid parts of their base. The impeachment rather ironically serves the same purpose for the far left of the Democrat party that it does with Trump, namely being a distraction. If the House hadn't proceeded with "impeachment" hearings, their base might have revolted and turned the party over to AOC and Ilhan Omar. Impeachment is a chew toy to occupy the far left just long enough for the party leadership to rig the primaries, although now they might be rigging them in favor of Bernie and away from Gabbard and Yang. More delicious irony.

So according to Schiff, since everyone knows that barring some revelation of an actual crime Trump won't be removed from office, the 2020 election results cannot be trusted, or at least cannot be trusted if Trump wins. A sitting U.S. Congressman is preemptively declaring the U.S. election to be null and void before it happens. Mr. Schiff allegedly affirms as his oath of office to support the Constitution of the United States every two years but here he is, on the floor of the Senate, undermining public trust in our upcoming elections.

In a sane country, Schiff would be censured for his statement and held to account but we don't live in a sane country. Schiff is violating his solemn oath of office as a Congressman and committing what amounts to an act of treason against the government of the United States.