The Real Question: Who Cares?

Conservative Inc. grifters like Candace Owens have been pushing the narrative that blacks are magically going to start voting Republican in huge numbers and the GOP should start pursuing those votes to ensure a #TRUMPLANDSLIDE2020MAGA. More sensible political observers know this is a load of crap. Blacks are by far the most monolithic and reliable voting block in America, far more than white evangelicals or any other group. After four years of having it shoved in their faces that Trump hates them, there is no way blacks are going to vote in any significant numbers for Trump. The best the GOP can hope for is low black turnout from a Pete Bootygag ticket. Right on cue comes a new report on black attitudes toward Trump: 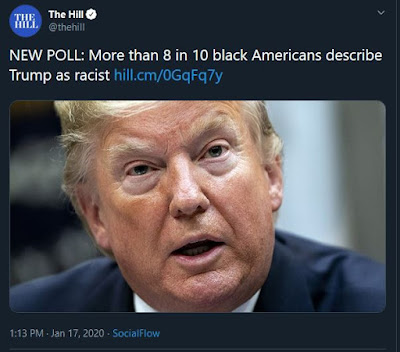 So much for that Blexit.

That won't stop the shills from pushing the Trump campaign to pursue black voters in vain while he continues to ignore his base that elected him. But that isn't my main point. My point is this:

Why is it significant if Trump is "racist"? By any reasonable measure, every President of the United States in my lifetime has been "racist" to some extent based on the current definition of the term. Our last President openly took sides in racial issues on a regular basis. I would bet that behind closed doors, Trump is probably the least "racist" President we have ever had.

The modern definition of "racism" is so broad that it includes everyone who is white. Our alleged "privilege" is so pervasive that all white people are automatically racist and there is nothing you can do to prove otherwise. So the proper to response to claims that Trump is "racist" is to say:

By most measures, blacks are doing great under Trump. So, would a black family rather be doing better under a "racist" President than doing poorly, as they were under Obama, with a non-"racist" President? If you would rather be living in misery than have a President where your standard of life is better but you don't think he likes you enough, the problem is with you, not Trump.

I don't know if Trump is a "racist" or not, and I doubt he is, so what I care about is whether he is keeping the promises he made (mostly no) and whether his policies are good for America (a mixed bag), and ultimately whether I want to vote for him because the alternative is so much worse (pretty possible).

There is nothing to be gained from trying to defend Trump from bogus charges of a meaningless slur.
Posted by Arthur Sido at 5:31 PM