The Commies Among Us

A quick follow-up to last night's post about Kyle Jurek, the Bernie Sanders staffer who was praising the gulag system, conflating Trump voters with Nazis and promising political violence.

One of the things I assume about Mr. Jurek is that, in spite of panicked coping from the Bernie-bros on social media, what he was saying was not outside of the ordinary in those circles. In other words, if what he was saying was not commonly understood and accepted in the "Democratic Socialist" movement, he never would have been a paid staffer in the critical battleground state of Iowa.

For example. If I go to a gun range and chat with the boys about how much I despise the government, I will get lots of attaboys and pats on the back. If I start taking about how the Nazi concentration camps weren't all that bad and muse about attacking cops, I will be out the door in a heartbeat and it will be clear I should never come back. If I am lucky I won't get my ass beat. But this guy starts venting stuff about gulags and re-education camps and burning down cities and "punching Nazis" (and that Jurek guy has never punched anyone, at least not in a fair fight), like it is a conversation he has had many times before. So his rhetoric cannot be unusual or verboten in Bernie-bro circles. Not every Bernie-bro is fapping to mental images of themselves smiting Nazis but maybe half of them certainly are. Kyle even bragged on video that there are lots of people like him in the Sanders camp. 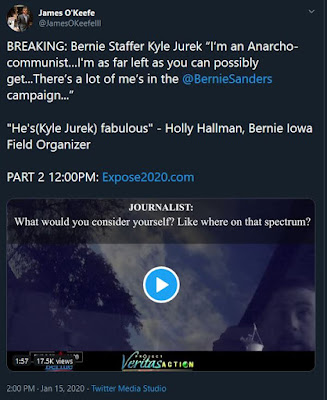 An "anarchist" pining for a totalitarian dictatorship. That only makes sense to people who worship a millionaire "socialist" like Bernie.

Meanwhile, we are less than a month away from the Iowa caucuses and Bernie is in a solid second place behind Biden, 18% to 24%, in the latest polling. In a different recent poll, Sanders was actually in a significant lead over Biden, 20% to 15%. Peter Buttpirate is an inexplicable 17% and Amy Klobuchar is at 8%. Seriously? How many average, midly politically aware Americans would recognize her name or her photo. I do but I am hyper-engaged, but 8%? Who the hell is her core constituency, white soccer moms who don't want to vote for Warren? Meanwhile Sanders is at 22% in New Hampshire, 18% (only 1% behind Biden) in Nevada and 18% in North Carolina but in California Bernie Sanders is in first place in the polls with 27% to Biden's 24% and California's primary is on Super Tuesday, only a month after Iowa. I believe this is the earliest California has voted in a primary so rather than being an after-thought, California's almost 500 delegates will be significant in choosing the Democrat nominee.

What does that mean? We are finally close enough to the primaries for people to start paying attention. Bernie Sanders is picking up some momentum as Democrats realize they are about to nominate a senile man deep in early stage dementia to run against Trump, and that by the time the general election debates roll around the stress of the campaign trail might push Gropin' Joe over the edge. Elizabeth Warren is fading and she and Bernie are getting testy with each other, including a widely discussed snub by Warren of Sander's offer of a handshake after last night's debate. If Warren's supporters realize she is not viable, they might coalesce behind Sanders (perhaps with assurances of Warren as Sander's VP) and that could mean either Bernie getting the nomination outright or a contested convention (or better yet, a third party run by Bernie that torpedoes Biden). So a man supported by people who think political violence is just peachy could be poised to be the nominee for the Democrats.

People like Kyle Jurek live in an echo chamber where their own radical ideology is reinforced and spun up to new levels on a daily basis. They are constantly told that Trump is a totalitarian dictator that they inexplicable are free to criticize in the harshest terms daily with no repercussions and that Trump supporters are at least as bad as "Nazis", not the historical Nazis from the 1930s/1940s but the cartoonish villains from popular culture. They aren't smart people but they are fanatical and that means the potential for political violence in 2020 is ratcheting up. If Biden had staved off dementia for a year, he would be running away with the nomination and people like Jurek would be depressed but with a few weeks until the Iowa caucuses, they are instead emboldened.

There is a decent chance of an internal civil war within the Democrats turning into internecine violence. That might spill over into the general population. The Kyle Jurek's in this country have been propagandized by the mass media and "education" system for decades and now they are about to be turned loose on the American political scene. Ironically Trump's only hope for winning in 2020 might come down to open warfare among the political Left. It will be amusing to see people like Jurek lose their minds when they inadvertently help re-elect The Devil. It will stop be amusing when the chaos slips the leash and turns into widespread political violence. The uncomfortable truth in American politics right now is that while we have been fear-mongered for years about the non-existent danger of "fascism" and "white supremacy", the truth is that we have millions of radical Leftists in this nation itching for the chance to assault cops, Trump supporters and just normal people that don't share their enthusiasm for the "revolution".

How long until the pot boils over?