The Color Of Crime In Fort Wayne Update

Earlier in January I posted some research I did on the racial composition of murder victims and perpetrators in nearby Fort Wayne, Indiana in a post titled The Color Of Crime In Fort Wayne. Since FW is close to us and a manageable sample size, it was an interesting exercise. Fort Wayne is also useful as a mid-sized city that is still around 70% white, a major contrast with slaughterhouses like Baltimore and Detroit. What I discovered was not surprising in the least, despite being only around 15% of the population of Fort Wayne, blacks account for most of the murderers and murder victims.

My plan is to keep the post updated as arrests are made. At the time of the post, of 29 homicides in Fort Wayne/Allen County, the identity of the killer was known in 18 cases. That just changed to 20 as another arrest has been made, in this case the killing of 41 year old black man Korta Queary.

Police arrest man on murder charge tied to May 2019 homicide

Fort Wayne Police say they arrested a man for murder related to a May 2019 homicide.

The Fort Wayne Homicide Unit along with the Narcotic and Gang Unit arrested Trayvon Rogan, 24, around 5:30 p.m. Tuesday for the shooting death of Korta Queary, 41. Police said Rogan was taken into custody in a traffic stop near Ardmore Rd. and Engle Rd. without incident.
....
The Allen County Coroner’s Office identified the victim as 41-year-old Korta Seon Queary of Fort Wayne. An autopsy found Queary died of a gunshot to the head and his death was ruled a homicide.

Police spokesman Michael Joyner said at the time that the death appeared to be “suspicious in nature.”

A gunshot wound to the head ruled as "suspicious in nature". Solid sleuthing there Columbo!

Mr. Rogan, no relation to Joe Rogan, has had a few run-ins with John Q. Law in his day so I found a mug shot pretty easily. 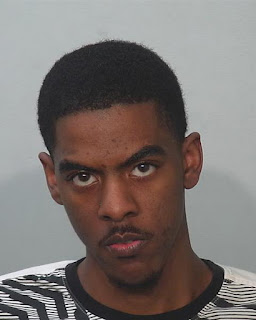 Cheerful looking fella! He has mastered the "Imma badass" glowering at the camera pose. That takes years of practice.

Mr. Rogan has been in the news in the past, in December of 2017 he was on the receiving end of a stabbing. Sadly he survived the stabbing and promptly killed someone else less than a year and a half later, so now the 24 year old Rogan will spend the next 40 or 50 years living in an Indiana prison being paid for by the tax-payers of Indiana.

While no one has been arrested for actually stabbing Mr. Rogan, a couple of his buddies (David Masterson and Joseph Britt) who brought him to the hospital were charged. 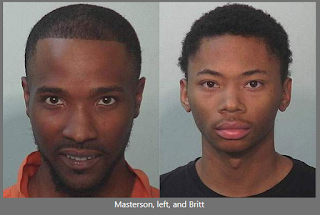 I don't know what to say about that. The genius on the left was driving the car that Rogan was dumped from at a local hospital and when the hospital mall cop police officer tried to stop them to ask them what was going on, aspiring nuclear physicist Masterson decided to ram the hospital cop with his car. A second mall cop hospital cop showed up and they realized that the driver had also been stabbed and was covered in blood so they took them both in, where they promptly gave fake names to the actual police and got charged for that, as well as Masterson hitting a public safety officer with his car.

Another killer identified (yes, he is presumed innocent until proven guilty, etc) in a 2019 Fort Wayne murder and yet again it is a black man who killed another black man. As Fort Wayne police steadily make progress investigating these murders, the percentage of known 2019 murderers in Fort Wayne creeps up. I updated the original post and this is where we are"

Of 20 known killers, 16 were black or 84%. Two were Hispanic and have been arrested. One was a white male and apparently was not arrested as he killed his "victim" in self-defense/defense of his mother and sister. One killer was a cop and his shooting was found justified. So taking those two out, of 18 traditional murders where the killer is known, around 89% of known killers were black and statically speaking the percentage of blacks perpetrators is probably much higher, likely over 95%. This is in a city where the black population is only around 15%.

The stark truth is this: without the 15% of the population in Fort Wayne that is black, we would essentially have zero murders and the overall violent and non-violent crime rate would plummet.

Remind me again, when has diversity ever been our greatest strength or a strength at all?
Posted by Arthur Sido at 8:56 AM