Social media is largely useless for anything substantive but it does provide a glimpse into how the human mind works. The assassination of Qasem Soleimani, or Qassem or whatever, this week has provoked a pretty fascinating response.

At the outset it is worth noting that apart from a few very connected observers of the Middle East, essentially none of the people commenting about his killing knew who Qasem Soleimani (QS from here on) was prior to last week. I am a modestly engaged guy and while I certainly would have seen his name in the past, it would have been just background noise lost among the string of random Middle Eastern names. So the outrage, joy and condemnation over his death is mostly just knee-jerk reactions based on political predisposition.

The usual suspects were all excited, neocons who won't have to fight in these wars they keep agitating for but never spill their own blood. That is to be expected, there are no limits on how many American young men and women they are willing to sacrifice to sate their blood lust and protect their own tribe.

A lot of BoomerCons are parroting back the talking points that QS was the worst terrorist the world has ever known, even though not a one of them knew who he was prior to last week. These are the people who talk about being patriotic Americans and conservative in their bios but also include the Israeli flag.

Many military vets are glad he is dead because they had buddies killed or maimed in Iraq by IEDs that are allegedly linked to QS, and I absolutely get that, but what they don't seem able to connect is that their buddy wouldn't have been killed by an IED in Iraq if our lying politicians hadn't sent them and their buddy to Iraq based on lies in the first place. Some are even more insane, like this guy providing a reminder that being one of millions of people who served in the military doesn't mean you are an expert or sane. 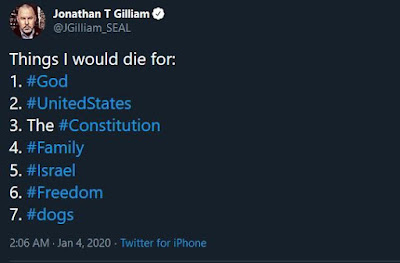 This guy declares himself a Christian in his profile while expressing his willingness to kill and die for people who reject Jesus Christ.

For the record, the things I would die for.

That's pretty much it.

Liberals are a bit confused, Iran is supposedly a repressive theocratic state that oppresses the gays but Trump was the one who called the strike so they are kind of unsure what to do, leaving a lot of them to lump this in with "police brutality" and other attacks on "black and brown bodies". Most of it comes down to "Trump was right to kill QS but Trump is also a warmonger and I hate Trump. Orange Man Bad!".

What has been very weird is the reaction of a lot of /ourguys/ on the Dissident Right who are putting Iranian flags in their profile and singing the praises of QS. I get that QS was an enemy of Israel and many of us are vehemently anti-Zionism but "enemy of my enemy is my friend" is rarely true. QS was the head of the "Islamic Revolutionary Guard Corps" and would quite happily have forced all of us to live under Islamic law. I am sure QS was not nearly as bad as the Zionist shills made him out to be but I am also sure that he wasn't the noble humanitarian some people on /ourside/ are making him out to be either.

Meanwhile, the Iraqi parliament has decided to use that purple-finger democracy we slaughtered Iraqis to give them in order to demand that U.S. forces leave Iraq. It will be interesting to see if we do. I am guessing that there is a lot of money in "aid" that will be used to grease the right palms in Iraq so we can stay.

Sometimes in a conflict, there isn't a "right" side to be on. We are supposed to be the world's sole remaining superpower but in general we have been used like a patsy for decades in wars that are none of our business. I don't have any special affection for Iran nor for Israel. If one is "better" than the other, that is still none of my business and all this does is cause division among the already fractured Dissident Right, get my people killed and distract us from doing anything about the invasion on our southern border. 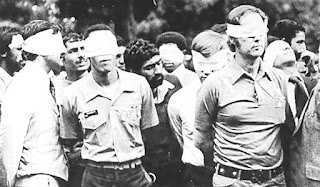 Ultimately Iran is a foreign nation that understandably hates America and Americans. In other words, they hate me and would celebrate my death. Even if their hatred is justified, it doesn't make it less true. Someone who tries to kill me for a good reason is still trying to kill me. Of course most Israelis don't like me either and laugh behind closed doors at idiot American evangelicals who send our sons to die for a nation that rejects their Lord.

We have been interfering in Iran since at least World War II and all it has done is make things worse. I am old enough to remember the Iran hostage crisis and what a national moment of shame it was, compounded by the gross incompetence of President Jimmy Carter. People today who lionize Carter as a swell guy generally don't remember what a God-awful President he was. Reagan had plenty of flaws but compared to Carter he was incredible.

I don't care about Iran or the Iranian people. I wish them the best but leave me out of their squabbles.

I don't care about Israel or the Israeli people. I wish them the best but leave me out of their squabbles.

I don't care about Iraq or the Iraqi people. I wish them the best but leave me out of their squabbles.

I do care about my people and right now we are fighting among ourselves over an issue that we have no voice in anyway. It is a foolish waste of time. Trump gonna Trump. 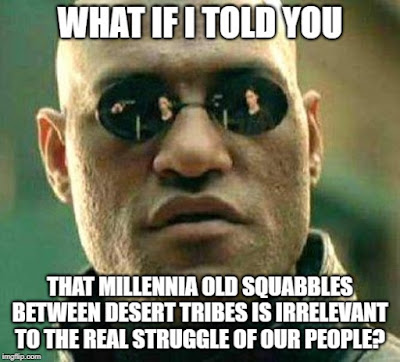