Resolutions For The New Year

Generally I think making resolutions for the new year is a waste of time because you almost certainly aren't going to do them anyway but along with preparing for what is coming, I am hoping as I do every year to read more in 2020. That isn't to say I didn't read in 2019, I certainly did. According to Goodreads, which only tracks books I read on my Kindle, this is what last year looked like. 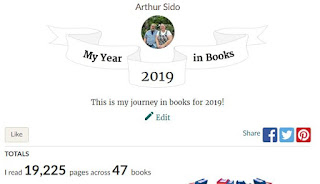 A little over 19,000 pages, plus I read at least a dozen or more actual books printed on paper. That sounds like a lot and it is but it only works out to like 52 pages per day. The vast majority of that was fiction stuff, I read a lot of Harry Bosch books last year and stuff from Larry Correia and a bunch of other stuff that was not intellectually taxing. My goal this year is a whole lot more non-fiction. To do that is going to mean spending less time reading about and fretting about stuff I can't control on the internet.

Another thing I need to do is write more stuff that is less reactive to the news. I have a bunch of drafts that are more philosophical that I want to get out this year.

I would like to get in better shape but that probably isn't going to happen however I do need to spend more time yeeting FMJ downrange to build muscle memory. Watching that fracking legend in Texas draw and pop the lunatic shooting in his church made me realize that if it ever comes time to draw my gun, I better be able to get it clear and put it on target quickly. In the real world you don't have time to set your feet, adjust your grip and really aim.

The other thing I really want to get a lot better at is making real life connections with like-minded folks around me. I have a few ideas about how to make that happen, mostly we need to expand our circle of friends beyond a whole bunch of Amish people. Those connections are super important but if things get really spicy, they won't be much help. Maybe they can load mags for me?

Less time needs to be spent on the internet in general. The internet is full of pseudo-intellectual wannabe philosophers and tough guys. The way a lot of guys bluster and chest-thump online you would think the commies would be just about wiped out but most of it is just anonymous people talking about what hard-hearted badasses they are. If you are afraid of losing your job but at the same time tell me what a ruthless Spartan of mayhem you are, something doesn't jive. No one is scared of you buddy, so give it a rest. The really tough people in the world don't need to constantly tell us how tough they are, just like really smart people don't need to remind people of their academic credentials.

We have some other stuff in the cooker on the family side that I might write about. It will be scary and/or exciting.

2020 has been looming on the horizon and here it is. Worry about what you can do in your own sphere of influence. Fretting about the betrayal of the whores we call politicians is a waste of time. No one is coming to save us so we had better be about the business of saving ourselves.
Posted by Arthur Sido at 11:17 AM