We haven't had a good hate hoax in a while so here is a solid contender. 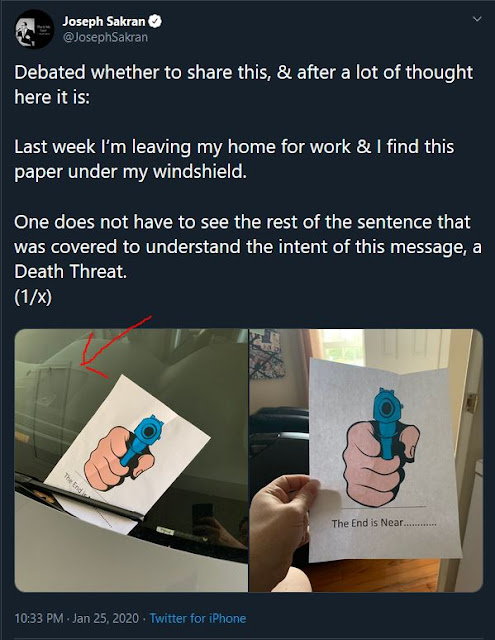 A "Death Threat" that features a clip art hand holding a gun with the words "The End is Near...." typed below them, on a very clean and obviously recently printed piece of paper. Super sleuth Dr. Sakran determined it was a threat intended to "silence" him. This looks like the exact sort of thing a rabid gun nut would do. Or maybe...

Dr. Sakran is apparently a trauma surgeon at Johns Hopkins in Baltimore when he isn't lying on Twitter, having received his medical degree from the Ben-Gurion University Medical School for International Health in Israel. He was apparently shot in the throat by an errant bullet at a football game when he was 17 and that gives him the authority and obligation to push to disarm law-abiding Americans.

Many people have pointed out the utterly preposterous nature of this claim, from the freshly printed flyer to the obviously staged nature of a photo under his windshield wiper in his garage (you can see in the reflection from the windshield that he is in an enclosed garage.). He clearly didn't put much effort into this. I ran a Google image search this morning for "hand holding a gun" and the picture he used was one of the first images to pop up. 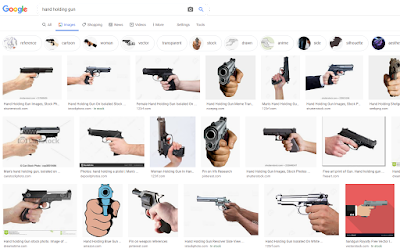 The replies to his tweet were awesome, Steve Sailer had perhaps my favorite:

The number of hoaxes used to try to advance a leftist agenda is pretty staggering at this point.

As if that wasn't bad enough, the Baltimore Sun did a piece on his story and put "death threat" in scare quotes. Even a left-wing newspaper wasn't buying his story. He expanded on his fanciful tale of NRA members stalking him....

In an interview with The Baltimore Sun, he said he believed the paper was placed on his car, parked near his parents’ home in Northern Virginia, sometime on or before Jan. 20 — which was the Martin Luther King Jr. holiday and the same day as a gun rights rally in Richmond, the state’s capital.

So his car was parked "near" his parent's home, suggesting that it was parked outside but when he photographed the flyer, it was in a garage. Curious, especially since it would imply that he is such a prominent opponent of the firearms community that someone knew to stalk where his parents live and knew which car he had but after all of this research all they did was place a MS Clipart photo under his windshield.

As a side-note, he allegedly found the "death threat" note the next day on January 21st. However the paper is perfectly clean, like it just came off the printer, and is not smudged at all. Go out to your car and run your finger along the wiper blade. Unless you just cleaned it recently, it will leave grime on your finger. But not this pristine piece of paper. Curious again. The story continues:

Sakran, 42, said he recalls grabbing what he thought was a flier off his windshield on the morning of Jan. 21 as he made his way into work at the U.S. Capitol, where he is serving as a Robert Wood Johnson Foundation health policy fellow....

He said he took no notice of what was on the paper that morning, distracted by thoughts about his new job. But days later, as he was cleaning out his car, he took a closer look and realized what it was with a jolt, he said.

“I was like, ‘Oh my gosh,’” he said. "A lot of emotions went through me, to be honest with you, having been a survivor — and also for my family.”

Uh, yeah. This was a full size piece of paper and he didn't look at it, in case it was a note or something? Even junk flyers on cars get glanced at but he was so enthralled with his new "job" trying to undercut the rights of Americans that he didn't notice that this pristine white piece of paper had a giant blue gun printed on it? I hope he pays more attention when he is performing surgery. Then, deep in the whole he has dug, he allegedly did this:

After finding the alleged threat in his car, Sakran said, he took a couple of pictures — placing it back on his windshield for one — and then threw it in the trash, ready to ignore it. On Saturday, he changed his mind.

He threw it in the trash "days later". Let's follow the timeline.

A gun nut left a weird note on the car of some guy few people have heard of after stalking him to know where his parents lived, what car he drives and where he parked on or around January 20th. Martin Luther King Day dontcha know!

He "found" the flyer on Tuesday the 21st and threw it in his car.

"Days later" he realized what it was and was super triggered over such an obviously serious threat. He claims he was very emotional. So obviously he did what anyone facing a serious threat did and threw it away after staging several photos. The photos he staged included a photo of the flyer on the windshield of his car but with the crease as it appears, the paper would have been facedown and mostly obscured on his car rather than facing outward and perched upright.

On Saturday he conveniently changed his mind, got the picture out of his trash and now claims he will be reporting this to the police. After leaving a piece of paper in his garbage for who knows how long, he says he intends to report the incident to law enforcement. I would love to watch the face of the cop taking that police report.

I am pretty certain he will never take this "death threat" to the cops because the only fingerprints or DNA on the paper will be his own and the cops might ask to compare the printout to his home printer and that would be awfully awkward. Not to mention that it sat in his trash for an undisclosed number of days so if that is true, it is probably covered in coffee grounds and who knows what else.

As someone who would be considered on the far extreme of radicalism when it comes to gun rights, I keep an eye on enemies of liberty like that little David Hogg weasel, the Parkland "survivor" and others. I have never heard of this guy. No one I know of would print something that infantile up and stalk him for the purposes of "silencing" someone no one cares about. It is only slightly more believable than two white guys with MAGA hats attacking a gay black actor in the middle of a freezing night in Chicago. He got lots of replies that just scorched him for his obvious hoax but a lot of doctors, many with foreign names, apparently bought his ridiculous story.

As noted, Dr. Sakran is a trauma surgeon at Johns Hopkins so I assume he sees a lot of gunshot victims. Since Hopkins is in Baltimore, a city that is 2/3 black and an absolute slaughter house of black on black gun violence, I get his concern. However, I would also hazard a guess that virtually all of the victims and perpetrators of gun violence he sees in the ER are black or mestizo and essentially all of them were shot with a handgun that was possessed illegally. None of them are NRA members. None of those shootings would be stopped by more restrictive gun laws as they mostly are already breaking the law by having guns in the first place. If Dr. Sakran was honest, and based on this story he is a sociopathic liar with a narcissistic need for attention, he would realize that the laws people like him push for would do nothing to curb gun violence in Baltimore, Chicago and St. Louis, so clearly he is motivated by a different set of priorities that have nothing to do with reducing gun violence. I will leave it to others to discern his motives.

The people we are fighting against in the public sphere are liars and sociopaths. Staging something like this to get attention on social media is a pretty stark sign of mental illness but I wonder how much he is getting paid by the Robert Wood Johnson foundation to be a "health policy fellow", a fancy title for someone who will publish BS papers. In fact the timing itself seems rather suspicious, almost as if he is drumming up some attention before starting what amounts to a lobbying position in D.C. rather than working as a surgeon. Curious indeed.

Dr. Sakran isn't fooling anybody. Anyone with an ounce of common sense sees right through this for what it is: a staged hoax designed to paint gun rights advocates as dangerous radicals just itching for an excuse to murder our opponents. The opposite is true. If the 25,000 people at the rally in Richmond wanted to, they could have easily stormed the capitol building, cutting through the police like melted butter, and assassinated the legislators trying to take away their rights. But they didn't because unlike the gangsters and thugs shooting the people ending up in Dr. Sakran's operating room, we are law abiding, decent people who still (perhaps naively) believe in the peaceful resolution of political disputes.

The real question is how much longer will Americans operate under the illusion that they have a voice in their own government?
Posted by Arthur Sido at 1:38 PM