When last we left "Republican" Indiana State Superintendent of Education Jennifer McCormick, she was siding with homosexuals who insisted on teaching in Christians schools over the right of Hoosier families to freedom of religion and the right of educational choice we have in Indiana.

This morning I see she is up to her usual helpful tactics of attacking the Republican governor of our state, Eric Holcomb.

Teachers in Indiana get paid a little more than $50,000 per year, which is quite respectable in a low cost of living state like Indiana, especially since they get more than a quarter of the year off. Also since we are endlessly dumping more money into schools and getting diminishing results, one might ask if the solution is just throwing more money at it but apparently Jennifer McCormick is concerned more with padding the rolls of union members and filling teacher's union coffers than she is with being fiscally responsible.

Just on a lark, I checked the official twitter account for Ms. McCormick. As she uses the twitter user name "suptdrmccormick", this is pretty clearly intended to be an official account of an elected representative. 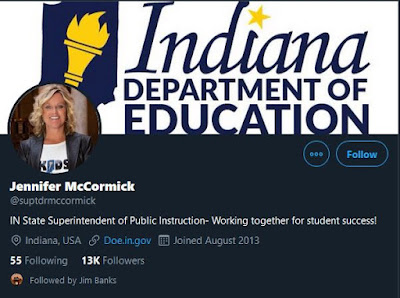 Who is the official account of "Republican" State Superintendent Jennifer McCormick following? Our Republican elected officials like GOP Governor Eric Holcomb? The chairman of the Indiana GOP, Kyle Hupfer? The Indiana state Republican party that made her the nominee in a deep red state, ensuring her this cushy job? Nope, none of those. Nor any recognizably conservative/Republican accounts at all.

But maybe she is trying to be non-partisan with her account, that would make sense right?

Nope. Here are a few of the accounts our "Republican" State Superintendent of Education is following with her official twitter account (I took these screenshots personally at around 8:30 AM on 1/16/2020) :

She follows the liberal Democrat governor of Pennsylvania but not the Republican governor of her own state. She also follows....

I had to look her up, but Jacqueline Coleman is the Democrat Lt. Governor of Kentucky.

Our own Governor in Indiana, Eric Holcomb, and our Republican Lt. Governor Suzanne Crouch don't warrant follows from our "Republican" State Superintendent of Public Education Jennifer McCormick. Again, as far as I can tell Jennifer McCormick follows a bunch of Democrats but not a single recognizable Republican at the Indiana state or the Federal level. Social media follows are not the sum total of a person but when you follow nothing but Democrats while claiming to be a Republican, it makes me suspicious that when she steps into the voting booth the only Republican that gets her vote is herself.

Why, if I didn't know better I might think that McCormick is just a Democrat who ran as a Republican because she knew that was the ticket to getting elected to state-wide office in Indiana.

With "Republicans" like Jennifer McCormick, who needs Democrats anyway?
Posted by Arthur Sido at 8:54 AM