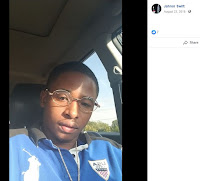 The gunman in the mass shooting in Kansas City has been identified as Jahron Swift. Mr. Swift was 29 years old and has a criminal history, including weapon charges so clearly existing gun laws did nothing to stop him. There was also apparently a drive-by shooting at the 9ine Ultra Lounge just last week, which explains why there was an armed security guard present. In fact it sounds like the club is a hotbed for malarkey and shenanigans.

On Tuesday, city leaders will meet with Regulated Industries to decide if 9ine Ultra Lounge is a nuisance and possibly revoke its liquor license.

What a nice club, no wonder they have an age limit to get in. Mr. Swift's age is significant, as I mentioned yesterday the club has a strict 30 and over policy for men. Reports indicate that he was trying to get into the club and a fight ensued. Was he denied entry because of his age, got into a squabble and started shooting? We might never find out.

It is also worth noting that around 22,000-25,000 mostly white, mostly heavily armed men were gathered in one place yesterday at the Richmond rally and there was absolutely no violence. The safest place in the world to be for an average person, of any color, was in the crowd in Richmond. Contrast that with the often tragic results of black men with illegal guns gathered in groups.

The problem in America is not the availability of guns.
Posted by Arthur Sido at 10:35 AM