Time Magazine, which apparently is still a thing, reported on a mass shooting in Aurora, Colorado. A total of five people, three juveniles and two adults, were wounded. Why is Time Magazine of all places reporting on this? Aurora, Colorado was the location of the 2012 theater shooting when James Eagan Holmes started shooting during a showing of The Dark Knight Rises resulting in 12 deaths and 70 more wounded. This shooting sparked fears of a copycat at the showing of the new Joker movie. It would seem that this shooting is noteworthy because it happened in the same city even though it apparently bears no other similarity to the more famous case.

Missing from the Time story? This little tidbit from the Aurora police: 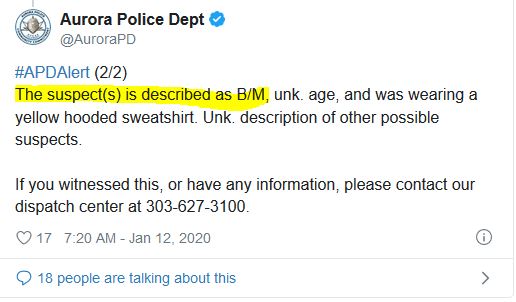 B/M is short for "Black, male". There is a pretty solid probability that the victims were also black. If Time was concerned with the shooting getting solved, you might think they would include the very limited description of a black man of indeterminate age wearing a hoodie. Then again, that wouldn't advance the narrative. So the story is just a way to remind people of a 7 year old shooting involving the very rare young white male shooter, and ignores completely that this shooting is like the vast majority of shootings (mass or otherwise) in American, committed by a black man.

The media is your enemy.
Posted by Arthur Sido at 9:21 AM