(OK, it was only 5 PM but I couldn't think of another Seattle themed reference. Also I have never watched that movie)

A shoot-out in Seattle last night in front of a McDonalds!

Initial reports were one or more gunmen got into an altercation and shots were fired. A woman was killed at the scene and seven people were wounded according to King 5 in Seattle:

Apparently this location is a hotbed of criminal behavior and as is often the case, the gunmen missed each other but hit a bunch of bystanders. These guys could watch a couple of Youtube videos about proper grip and setting your feet and maybe they would hit their target instead of women and 9 year old kids?

The police were pretty cagey about the descriptions of the suspects which is pretty much the same thing as providing a description if you are paying attention but they finally released a couple of names and pictures. 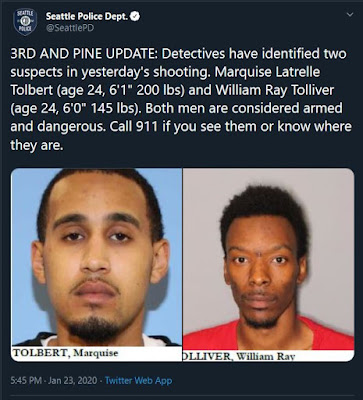 It is handy when our diverse criminals already have mugshots and according to King 5, these boys have been to the station a time or two:

No, that is not a typo. These two gunslingers have been arrested a combined 65 times and both have been convicted at least once for felonies.

A third man, Jamel Lionell Jackson, who was wounded in the shooting, was treated for his wounds and arrested:

The third suspect, Jamel Linonell Jackson, 21, was arrested at the scene for being a felon with a gun. Police found him shot, and Jackson was booked at 10:19 p.m. Wednesday after being released from Harborview Medical Center.

Police said Jackson admitted to having a gun during Wednesday’s shooting, and they were corroborating that with video evidence. Jackson’s criminal history includes robbery convictions, a misdemeanor harassment conviction and two prior convictions for unlawful handgun possession, court documents show.

In a 2017 guilty plea, Jackson said he was not a gang member. But police that year said he was a known gang member, outlined his alleged gang ties in court documents, and prosecutors wrote that Jackson “is likely to commit a violent offense.” Prosecutors wrote that after Jackson was arrested for being a felon in possession of a handgun outside the same McDonald’s on Third Avenue where Wednesday’s shooting happened.

Oddly enough that didn't stop them from obtaining handguns. It is almost as if laws don't dissuade criminals or something. We should clearly try to disarm law abiding citizens, that should stop the fellas from shooting at each other and gunning down bystanders.

Also worth noting, Seattle is a pretty vanilla city, still over 2/3 white as of 2010 and only around 8% black.

People on twitter are bitching about the lack of police presence but since this is Seattle you can be sure that if the cops were hanging around there, they would be bitching about "racial profiling" and "white supremacy". It sounds like Seattle is getting more violent and lawless by the day, but since the city is mostly full of white liberals I can't say I have much sympathy.

It has been a while since we have had a mass shooting that involved a white gunmen, but you can be sure the media is anxiously awaiting the next one while stories like this fade away within hours once the suspects are named.
Posted by Arthur Sido at 3:09 PM