The Greatest President Ever is at it again: 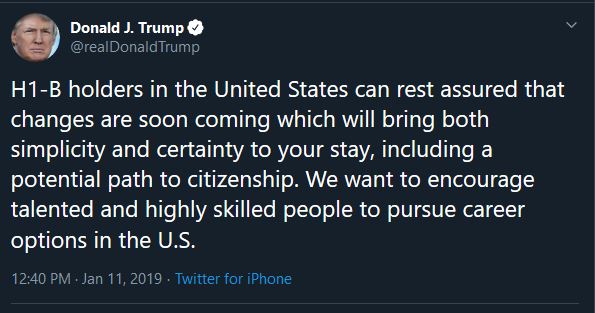 The people who voted for Trump once again get nothing but mass immigration of low wage workers to appease the Chamber of Commerce. What about the talented and highly skilled people who are actual Americans that want to pursue career options in the U.S.? Oh sorry, they want to get paid too much. Let's bring in Pajeet and Sanjay, they won't mind working for subsistence wages and living 17 to an apartment. It beats living somewhere without running water or basic sanitation. Of course when Sanjay brings his wife over and she starts cranking out anchor babies, those babies will grow up to vote Democrat in 18 years. This plan has worked to make California permanently blue, and is doing the same thing in Virginia, in Georgia, in Florida and in Texas.

It doesn't really matter that much which non-American, Third-world immigrants you fill the country up with. The end result is still a Third-world country with nukes. Most of the Mexicans I know around here are OK people and work hard. That doesn't mean that they are going to be able to sustain the American system. They haven't been able to form, much less sustain, a country I want to live in so why would anyone assume they will magically be able to once they move here? The same is true of people from South Asia (India/Pakistan/Bangladesh/etc). No one wants to live in those countries, that is why they all want to move here so when you fill this country up with South Asians, you get a less humid South Asia and the same problems repeat themselves.

What people don't seem to understand is that our economy has evolved and developed into where we are today over the course of hundreds of years of American history. The price of a gallon of milk doesn't spring forth anew from under a toadstool each morning. The salary you get for your job is directly related to the salary someone with the same experience got for the same job ten years ago. The same is true of the prices of consumer and durable goods. The price of a home is based on the cost of raw materials and the labor to build the home, prices that are in turn based on what the housing market can bear. There is no point in building a new 3 bedroom single family home and trying to sell it for $750,000 if the average buyer of that kind of home can only afford a $150,000 home. So prices for goods and wages for labor develop over time within an economic system. It is almost akin to a living organism.

Then you drop into the mix people from an economy that is far different and a culture with different expectations. They don't do the job as well, and this is widely documented, but they are willing to do it for much less. This prices actual American workers out of those positions because Americans are not willing to work for subsistence level wages, crammed into tiny apartments with no end in sight. Nor should they. High tech jobs are supposed to be skilled positions, that was the great promise of the tech revolution. We were told that these high tech jobs would replace the factory jobs we were shipping overseas but it turns out that now we are simply importing cheap, crappy workers to replace American workers right alongside cheap, crappy consumer goods to replace well-made U.S. products.

What the hell is Trump thinking? Who is advising him to do this? The only people benefiting from this are the Pajeets and Sanjays who escape from their own country that is full of Pajeets and Sanjays and of course a few corporate oligarchs and hedge fund managers who hate Trump's guts anyway.

Even the pro-mass migration Wall Street Journal is finally admitting that mass migration is replacing Trump's base: WSJ: ‘Demographic Shift’ Helping to Replace Trump’s Base of Support.

A report by the Wall Street Journal details how a “demographic shift” — with the help of more than 1.2 million legal immigrants being admitted to the United States every year — is changing the American electorate in favor of Democrats.

Trump’s white working-class base of support, the Journal notes, is expected to decline in population by about 2.3 percent in time for the 2020 presidential election. Still, about 23 million white non-college educated men did not vote in the 2016 presidential election — a pool of untapped support that the Trump campaign could draw on.

The article also points out what I have been saying for a while, that demographic shifts are enough to flip states that put Trump over the top like Michigan and Pennsylvania to the Democrats and even states like Florida are in danger of flipping for no reason other than demographic changes. None of that dissuades Trump from bringing in more Democrat voters to replace Republican voters, nor does it seem to bother his slavish followers.

When your people are being replaced, priced out of jobs in the economy they created and being endlessly scorned, it really doesn't matter that much if they people replacing you came here legally or not. Replacement is replacement and it means the death of the Republican Party. At this point, is there a huge difference between Trump and a President Marco Rubio or Jeb Bush? We might be in more wars but otherwise his domestic policy is all about appeasing Wall Street and his foreign policy is all about sycophantic devotion to Israel.

Don't squander what little time you have left. Trump was supposed to be the savior, instead he is merely a stopgap. Sad!
Posted by Arthur Sido at 8:30 AM