....but it is looking like Our Greatest Ally™ is finally going to succeed in manipulating Trump into a war with Iran. This has been coming since Trump took office and it is finally here. First a "random" airstrike, then a totally for sure "spontaneous" attack on our embassy in Iraq which went on for hours with no interference from the Iraqi "security" forces we spent billions arming and training. That got the neocons all in a lather and to finish them off, Trump orders an airstrike on Qassem Soleimani, some Iranian guy that 99.999% of the people panting with exhilaration over the death of, have never heard of. This will almost certainly result in some back and forth retaliation and quite possibly lead to open hostility with Iran. Just a day before the airstrike, it was announced that up to 4,000 troops could be deployed to Kuwait as a staging point.

The usual suspects in American politics are giddy. Even chicken-hawk war-mongering John Bolton was excited about the prospect of more dead Americans. 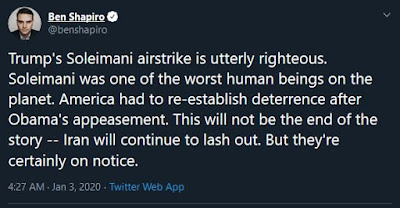 Ben didn't serve in the military and his kids certainly won't but he is awfully eager to send your kids and grandkids to die in yet another pointless Middle East conflict. Then there is this guy 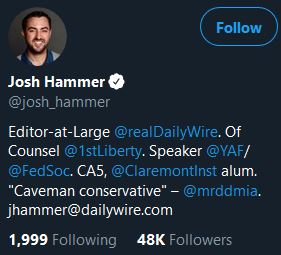 Imagine that you feel all warm and fuzzy about being an American because of an airstrike that killed a guy you had never heard of before this week. My response....

We will never defeat the Left when we are constantly being undermined by a fifth column in American "conservatism".

This whole thing stunk from the get-go. Why would the Iranians intentionally provoke the U.S. by backing an attack on our embassy, an attack that had clumsy and obvious historic context back to the Iranian hostage crisis? As always the question is Cui bono, who benefits? Not the Iranians. There are a nearly limitless number of ways the U.S. can make life miserable for Iran without setting a single boot on Iranian soil. More sanctions and international pressure. Airstrikes, drone attacks, cruise missile attacks. There is no upside for Iran. So who?

Netanyahu said the files that Israeli intelligence had obtained came from a storage facility for the files on the nuclear weapons program in the Shorabad district in southern Tehran. The Israelis managed to get 55,000 pages of documents and another 55,000 files on 183 CDs. The originals are now in a “very safe place,” Netanyahu assured anyone watching.

In 2018 we are supposed to believe that Iran was keeping their SOOPER SECKET NUKLEER PROGRAM data on 55,000 sheets of paper and 183 CDs, which coincidentally have 55,000 files, the exact same number of pages of documents allegedly stolen? When you can get a 128 gb flashdrive for like $15? Also that they had this stuff all sitting around in boxes in a storage facility that the Israelis just waltzed into and stole? I am not an expert in nuclear security but I assume that U.S. nuclear data is not sitting around somewhere you can just grab. But don't worry, even though we haven't been able to examine this data, Netanyahu assures us it is all legit and Israel has the originals in a "very safe place", where coincidentally no one can look at the "evidence" to examine it for authenticity. If you can't trust a guy who said in 2012 that Iran was on the verge of a nuclear weapon using a cartoon drawing of a bomb, who can you trust? 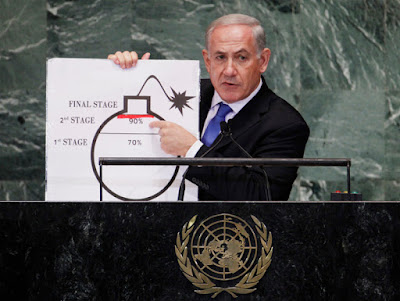 That looks like something Wile E. Coyote would order from the Acme Nuclear Bomb Company.

To be clear: I don't wish Israel any ill will whatsoever. A free and safe Israel is great. However....

I don't care for the idea of giving almost $4,000,000,000 per year to a nation with a vibrant economy, one of highest per capita GDPs in the world and a technologically advanced military.

Likewise, it certainly seems that the U.S. keeps getting involved in Middle Eastern wars at the urging of Israel, wars that have no U.S. national security interest. What most of the Twitter warriors clamoring for war with Iran seem to not understand:

- We went into Iraq on the basis of outright lies.
- As a result of that war, hundreds of thousands of Iraqi civilians died and few would argue that their lives are better as a result of the invasion or that they are more favorably inclined toward America.
- The invasion also destabilized the entire region.
- This led to the rise of ISIS which at one time held a huge amount of real estate in the Middle East, repressing ethnic groups like the Yazidis.
- The Iraq invasion is also likely responsible for the near complete removal of Christians from much of the Middle East,

- There were nearly 4,500 U.S. soldiers killed in Iraq.
- An additional 22,700 Americans were wounded.
- Of those wounded, at least 1600 suffered some sort of amputation.
- Hundreds of thousands of U.S. troops suffered traumatic brain injuries, including up to 90,000 with long-term health problems requiring perpetual treatment. Guess who gets to pay for lifelong brain trauma treatment for 90,000 20-something year old Americans? Hint: not Our Greatest Ally™.

On the other hand, Iran is much larger:

Iran is also fairly closely aligned with Russia, adding a significant threat of an unthinkable escalation with a nuclear power with thousands of warheads.

Add it all up and a war with Iran would likely make the Iraq invasion look like a walk in the park. Sure we would "win" but at what cost and more importantly what vital national interest would be served at the cost of tens of thousands of Americans dead and maimed and untold billions spent? Things won't improve in the Middle East and will almost certainly get worse. America will bring more of our kids home in flag draped coffins. Muslims will have yet another reason to hate us even more than they would normally. It makes no sense whatsoever.

Unfortunately no one that might speak some sense to Trump is still around in this administration and he seems hellbent on getting into a war that no one wants outside of a few neocons and some idiot Boomers with Israeli flags in their social media profile who get their theology from the Left Behind books and the Scofield Bible.

Meanwhile, a quick reminder of where our priority should be. 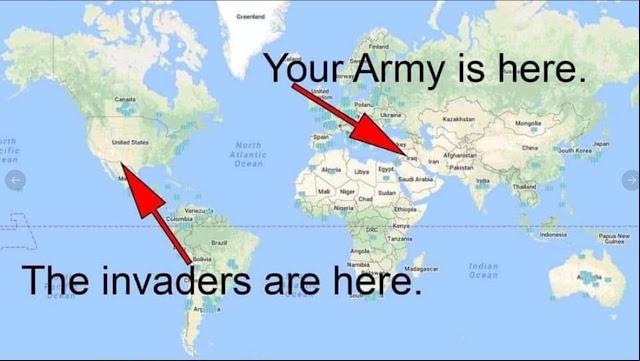