My useless Congress-critter Jim Banks decided to get into a social media spat with low IQ, brother-marrying Ilhan Omar. Sure, nothing is getting done on immigration or the wall but Jim has time to squabble with Ilhan Omar about who really has PTSD or not.

First, Ilhan took time away from browsing Tinder looking for new relatives to date to tell us that the assassination of an Iranian general triggered her PTSD. Jim took umbrage at her statement. 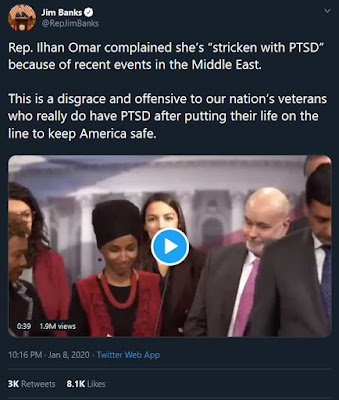 Ilhan Omar struck back with amazing speed for someone who grew up in a society that is barely a step above the Stone Age. 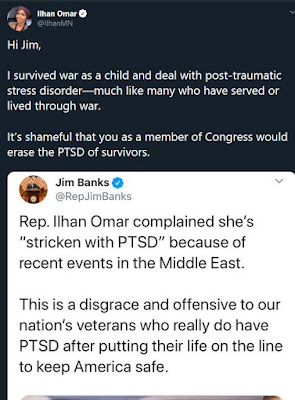 I gotta say that Ilhan Omar got the better of that exchange because Jim Banks didn't point out the obvious thing that I pointed out, which is that Ilhan Omar's family fled from Somalia because it is full of Somalians to flee to a country because it is full of people that look like me and Jim Banks. Since coming here, after being given shelter and the opportunity to become quite wealthy in the U.S., Ilhan Omar has endlessly kvetched about how awful America is and how racist and terrible actual Americans are. So her solution is to do everything in her power to turn America into the sort of place she and her family were forced to flee from. Sure we will be ruled by local warlords but at least those warlords will have gained power by violence and intimidation, not by white privilege!

That is the sort of thing that makes sense when you are an imbecile who marries her own brother. At least she didn't marry a sister, that would be peak 2020.

Jim Banks gets a little momentary attention and the BoomerCons in our congressional district probably ate that up. He'll get praised by the RNC for taking a shot at Ilhan Omar without addressing the system that allows people like her to come here, become permanent squatters and eventually make laws for Americans. Jim Banks is the ultimate empty suit politician, a more reliable and loyal Mitt Romney.

This is why I will cast my vote in May for Chris Magiera, he won't beat Jim Banks who has that sweet corporate money and the vacant look so cherished in our elected officials but at least it will make me feel better.

Banks and Ilhan Omar are perfect examples of why our representative democracy no longer works. Too much money and power concentrated too far from the people means that empty suits like Banks and imbeciles like Ilhan Omar are making the laws the rest of us have to live with. In a sane society, Jim Banks would be selling used cars and Ilhan Omar would be cleaning toilets, or better yet be living back in Somalia. Instead they and 433 other, mostly useless and generally dumb, Congressmen are tinkering around in our lives, doing the bidding of the donor class.

It is time to burn the whole system down, beginning with the entire District of Columbia, and start over.
Posted by Arthur Sido at 9:00 AM