Uh oh, Dr. Joseph Sakran, he of the totally credible "death threat" note on his car (in his garage), seems to have deleted the tweet with the obviously printed by himself fake threat totally believable death threat photos. 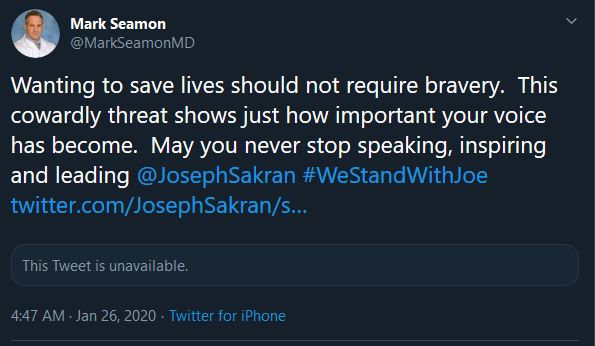 Dr. Seamon still has this tweet up but the original tweet is gone. Dr. Sakran didn't protect his account or block me, his account is still there. No explanation from the good doctor as to why he deleted this threat, his last tweet from was three days ago when he expressed sorrow at the death of rapist sportsball hero Kobe Bryant. No explanation of what happened or why he deleted his tweet.

If I was suspicious I would think that this whole thing was a stunt that blew up and got more attention than he expected and now he is trying to squash the whole thing. I wonder if someone from the Robert Wood Johnson Foundation was asking some uncomfortable questions or outright told him to take it down because it makes their whole organization look stupid?

The people trying to disarm us have no problem lying to accomplish their goals. We have to be on our game 100% of the time to protect what rights we still have left.
Posted by Arthur Sido at 9:38 AM