The Rocky Road To Re-Election

Anyone who will listen to me will hear the same thing: Trump almost certainly loses next year. Not because of the economy which is mostly great. Not because of impeachment. Certainly not because the Democrats nominate a rock star to run against him. It is all about simple demographics.

Audacious Epigone posted this a few days ago: 2020 Polling Prognostications and it is pretty sobering. Yes it is early and few people are paying attention right now but I anticipate an effort by the mass media and social media to push a disinformation and suppression campaign like we have never seen next year. I’ll share one map from his post but you should read the whole thing. 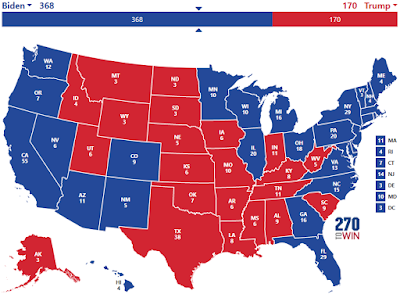 What is noteworthy here is that not only does this show Trump trailing in places like Pennsylvania, Wisconsin and Michigan that gave him the margin of victory in 2016, they also show states like Ohio, Georgia and the big one Florida leaning blue right now. I wrote back in June that I thought Florida would likely go Democrat in 2020, sinking Trump and nothing has changed to convince me otherwise.

Something else of note is the state of Texas. From AE:

The RCP average has Trump beating Biden in Texas by less than one point, and Texas was one of eleven states where Trump performed worse in the actual election than polling predicted he would in 2016. If Biden wins Texas in this scenario, the electoral blowout intensifies to 406-132.

Texas’ time is near. Being the only state in the country where whites vote more Republican than non-whites vote Democrat is not going to be enough in a place that is 41% white and falling and where just one-in-three births are to white babies.

The relatively close race between Ted Cruz and “Beto” O’Rourke in 2018 makes Texas seem like less of a sure thing than it has been in decades and it bears repeating that even if Trump ekes out a win in Texas in 2020, it is certain that no recognizable Republican will win that state again.

We are a little over two weeks from the beginning of 2020 and once the holidays are over, we are going to be in the thick of it almost immediately. There are only 51 days until the February 3rd Iowa caucuses and as of right now there isn’t much time left for the challengers to derail Joe Biden. If his handlers are smart, they keep Joe away from crowds, cameras and above all children as much as they can, saving up his last few moments of lucidity for the debates.

Can Trump rally his 2016 voters, get white voters to start thinking about their collective self-interests and peel away enough non-white voters to pull out 2020? Probably not but a lot can happen in the next 11 months. Whatever happens, it is going to be wild and Trump is going to need an unimaginable string of luck and missteps by the Democrats to pull this out.