The Problem With Democracy Is Pretty Much Everything

In a year full of great posts from the Zman, Monday, December 23rd might be the best and the opening paragraph should be required reading.

From The Value Of Dumb Ideas:

Dumb ideas are a feature of democracy. The main reason for this is the majority of people trusted with a vote are average or below average. Democracy works on the assumption that people work in series. Connect enough of them, no matter their intellectual capacity, and you get enough brain power. In reality, people work in parallel, so the more you connect, the faster dumb ideas flow through society. Democracy is the form of government with the lowest resistance to dumb ideas.

One man, one vote sounds great until you meet enough people one man at a time

Or as many of the kids on the Dissident Right say:

Voting is fake and gay.

I have found it increasingly hard to stay wedded to the idea of democracy the older I get and the more voters I meet. Go to an average Wal-Mart in America, walk around for half an hour and then realize that most of the people you see are able to vote away your liberty, your money and even your life.

Think for just a moment about the act of voting in a leviathan state like the U.S. in 2019.

In a republic, our modern U.S. style representative democracy means that I am represented at the Federal level by a President who is elected by an electoral college. The Left is trying to abolish this system to allow a few massive states full of non-white voters, in other words California, to decide our elections while leaving smaller states like my home of Indiana without a say. That is specifically what the electoral college is designed to prevent. So in my very reliably red state, I am one of a little over 2.7 million people who voted in 2016. That is not statistically significant. Our state has 11 electoral college votes out of 538, or around 2% of the total and 4% of the 270 needed to win election. So even with a large family I am a statistically insignificant blip in an already statistically barely significant state when it comes to choosing a President. I show up but my vote is meaningless in any significant sense.

What about the U.S. Senate? In 2018, 2,282,565 votes were cast in the state of Indiana in the Senate race between Republican Mike Braun and incumbent Democrat Joe Donnelly. My vote was theoretically less insignificant but again my contribution to Mike Braun's winning margin was irrelevant. There are millions of people in Indiana and Mike Braun represents all of them but even Braun and Todd Young, my other Senator, are only 2% of the votes in the U.S. Senate. So again, I am a statistically insignificant voter represented by two guys who are a tiny fraction of the Senate.

The House of Representatives is supposed to be our local representative. Article One, Section Two of the Constitution established that each Representative would have a small district: The number of Representatives shall not exceed one for every thirty thousand, but each state shall have at least one Representative... 30,000 people is a big number but since women couldn't vote, that reduced the voting population to 15,000 and a significant number of those males were children or otherwise ineligible to vote. So maybe 10,000 actual voters in a district that means that your vote starts to have some real meaning.

Is that still the case? In 1911, the number of House seats was locked down at 435 so as the population grew, so did the number of people making up a Congressional district. An individual Congressional district right now is made up of approximately 711,000 people as of the most recent census. That number will of course change in 2020 as many Trump voting districts will be lost to California and Texas thanks to counting criminal illegal aliens who are living in our country. They might not vote, although they probably do and Democrat are desperate to help them vote illegally, but they definitely draw Congressional representation away from actual Americans. So in my district of 711,000 my family and I are a little more significant but still pretty inconsequential in terms of total votes cast. Sure my Congressman, Jim Banks, is considered very "conservative", which mostly seems to mean that he rails against government spending while at the same time demanding more military spending so we can fight every other nation on Earth simultaneously. But he is one guy. Meanwhile there are 434 other Congressmen who are supposedly fighting for their own district's best interested and after the 2020 census, the number of Congressional districts working directly at odds with me and my family will skyrocket. So Jim Banks isn't going to be of much help.

Basically in 2019, a regular American working stiff without the extra income to make significant contributions to a politician and without the time and inclination to be an online influencer has essentially no say in their own government. That is just as true in a small population state like Wyoming and even more true in huge population states like Texas and California. Ask a conservative inexplicably living in California how much control over their government they have and when they stop laughing they will tell you it is somewhere south of zero.

Of course the way our system operates is not how it was intended to work. The system was set up for a much smaller nation, geographically and numerically, that was almost entirely ethnically homogeneous, made up of people with a similar moral foundation. Many early Americans and many of the Founders were deists and of those who identified with the Christian faith, I assume most of them were only marginally serious about it. Still, that cultural Christianity provided a common moral framework for our country. It was a high trust society due to our homogeneity. The Federal government was highly limited and the state and local government had far more control that they do now. There was no Department of Education full of bureaucrats who tell people in communities they couldn't find on a map in states they have never been to how to best educate their own children.

It is pretty obvious that a representative democracy where we have a universal franchise in a multi-ethnic society of 330 million people isn't working.

So what is the alternative? It is said that Winston Churchill uttered something similar to this: Democracy is the worst form of government except all of the other systems that have been tried. But he is also said to have declared: The best argument against democracy is a five-minute conversation with the average voter. Today we don't even need to have a conversation, we get inundated with ignorant, stupid opinions from people on social media 24-7. People who feel superior because they put their pronouns in their bio or who talk about "resisting" and "punching Nazis". On our side there are lots of Boomercons talking about how patriotic they are while putting the flag of a foreign nation in their bio or who think that the Constitution plus magic dirt equals immigrants being "natural conservatives". Or worse yet are the enormous number of people who spend all of their time fretting about what celebrities are doing or whether a sports team full of people who wouldn't give them the time of day are going to win or not. These people are blissfully ignorant and then on election day stumble into the booth to vote based on...well, whatever whim strikes them at that moment. These are people who voted for Obama and then voted for Trump and then voted for a Democrat for Congress, never connecting the dots to explain why voting for someone like Trump and then voting for someone who tries to "impeach" him makes any sense.

Trying to figure out an alternative to liberal democracy right now is a fun exercise. There are lots of opinions on it but the thing is, we need to rebuild first. None of this will matter without a much smaller, high trust, largely homogeneous society. I plan on spending some time talking about what we might do in the future but always with the recognition that we must first come through the fire before we can rebuild. That is the first priority. 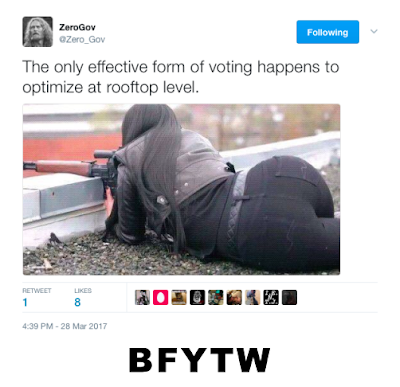