The American Dream Is Racist Apparently

When America was mostly populated with Americans, rather than the detritus of the rest of the world and their offspring, we all believed in something called the American dream which had as it's pinnacle owning your own home. The dream involved a pretty simple plan. You worked hard, saved your money and used your savings as a downpayment on your own home. The little ranch home with a neat lawn and a white picket fence was what most people aspired to. It was a noble and healthy goal. You set aside immediate consumption, avoided getting into debt and invested your savings in what was for most people their most valuable asset: a single family home.

The American dream was available to anyone who would follow the plan. I have written before about my father coming from an impoverished background, working his way through college and medical school and not only owning his own home but building a successful medical practice. He came from the least privileged background of anyone I know and he rose above it because that is what you can do in America. 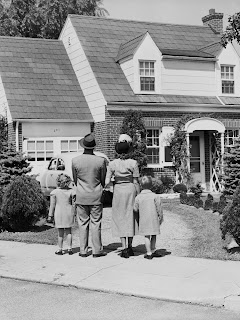 Single family owner-occupied homes are the lynch-pin of healthy communities. Unless you are very wealthy, most people buy their home via a mortgage of 15-30 years, most commonly 30 years. With a mortgage you used to have a significant down-payment to go along with your loan so you had a lot of money invested personally in the home. That meant that most people buying a home intended to stay in that house for an extended period of time. My wife's parents still own the home she grew up in and have owned it for over 50 years. My parents owned the home I grew up in for probably at least 30 years before retiring to a lake house.

When you buy a house you have ownership in it. It is your house, not a place someone else owns that you rent by the month to have a roof over your head. Owning your home and investing both time and money into it makes for a community, not simply an ever-shifting set of economic units renting a few rooms while they work and consume until they move somewhere different to work and consume and a new economic unit replaces them in their rental. There is something quintessentially American about owning your own place. Americans moved from the Eastern cities to go "out West", a term we still use today, because you could own your own farm. Owning your own home also signified a certain level of responsibility. When the country was new, you had to own property or pay taxes in order to vote. I would be completely in favor of replacing the universal franchise with that system.

It wasn't a perfect system of course. My maternal grandparents never owned a home as far as I know. My wife and I rented for many years as our family was growing and I moved us around chasing higher salary jobs. Many, many years ago there were barriers to non-whites in America buying homes in some neighborhoods. Still, home ownership is something that should be a goal for most American families. Owning a home can be expensive and a hassle but it is also incredibly fulfilling, healthy and wholesome.

So of course the Left wants to destroy it.

In Virginia, the incoming Democrats seem hellbent on kicking off the next Civil War in the former capitol of the Confederacy. They are threatening sweeping "gun control" laws, with Virginia Governor Ralph "Got Away With Blackface" Northam already suggesting a higher prison budget to jail recalcitrant gun owners. Now we see a Virginia State House Delegate, Ibraheem Samirah, talking about overriding zoning laws to "permit multi-family housing in every neighborhood".

Democrats in Virginia may override local zoning to bring high-density housing, including public housing, to every neighborhood statewide — whether residents want it or not.

The measure could quickly transform the suburban lifestyle enjoyed by millions, permitting duplexes to be built on suburban lots in neighborhoods previously consisting of quiet streets and open green spaces. Proponents of “upzoning” say the changes are necessary because suburbs are bastions of segregation and elitism, as well as bad for the environment.

The move, which aims to provide “affordable housing,” might be fiercely opposed by local officials throughout the state, who have deliberately created and preserved neighborhoods with particular character — some dense and walkable, others semi-rural and private — to accommodate people’s various preferences.

We will see how that plays when the wealthy liberal denizens of Northern Virginia suddenly start getting low-income apartment complexes in their high income neighborhoods and that diversity they talk so glowingly about but pay to avoid starts intruding on their kid's school.

Mr. Samirah doesn't mince words about who he is targeting.

“Single-family housing zones would become two-zoned,” Samirah told the Daily Caller News Foundation. “Areas that would be impacted most would be the suburbs that have not done their part in helping out.”

“The real issues are the areas in between very dense areas which are single-family zoned. Those are the areas that the state is having significant trouble dealing with. They’re living in a bubble,” he said.

He said suburbs were “mostly white and wealthy” and that their local officials — who have historically been in charge of zoning — were ignoring the desires of poor people, who did not have time to lobby them to increase suburban density.

In other words, them suburbs is too white and so they must be punished by having non-whites build duplexes and apartments in their neighborhoods. He didn't get the memo that liberal whites love diversity as long as their kids can still attend schools that are entirely white, Asian and Jewish with a couple of high achieving minorities to appear in photos on the school website. They still mention that single family suburban homes are "bad for the environment" but as we will see, that isn't their primary concern. Oh, the Daily Caller pointed out that Mr. Samirah comes from an apple-pie American family:

His father is Jordanian refugee Sabri Samirah, who authorities banned from the U.S. for a decade after the Sept. 11, 2001 attacks, in part because of his membership in the Muslim Brotherhood, the Chicago Tribune reported in 2014.

Nice, what an enriching individual! What would we do without the children of terrorist sympathizers in our legislatures?

What we are seeing in Virginia is just a taste of what will happen nationally when the Democrats take permanent control of the Federal government. Their vengeance pogroms will be fierce and swift and you, gentle reader, will be the target of their fury.

The Left is always coordinating stuff like this. Notice this recent article from The Nation by one Kian Goh. Mr. Goh seems to think that the American Dream needs a serious rethinking.

The tweet from The Nation read: If we want to keep cities safe in the face of climate change, we need to seriously question the ideal of private homeownership.

Time to rethink private homeownership. I think we already have tried this and it led to the lovely architecture we saw in Eastern Europe and the Soviet Union where people were crammed into giant concrete block apartments like livestock. Glorious! Again, Ms. Goh couches her argument in an "environmental" framework but we all know that what she is really pushing for is forcing everyone to live in cities, forcibly reintegrating people who choose to live in suburban and rural areas in large part to get away from vibrant diversity. Having suburbs, highways, cars and cheap gas has meant that middle-class people (white people) have been able to move away from the cities we built as they have become unlivable thanks to diversity. The goal is to punish us for this by forcing us to live in "diverse" neighborhoods. Of course it would be worth asking why anyone should be forced to live in diverse neighborhoods, wouldn't we want to live there if it is so great? Oh that's right, we are "racist" for wanting our kids to have decent schools and for wanting to raise our family in safe neighborhoods.

The other obvious question is why we have people named Kian Goh and Ibraheem Samirah deciding what the American dream should or shouldn't be. People named Smith and Johnson and Anderson figured that out centuries before the Goh and Samirah families decided to come from their own failed cultures to tell us how we should change our successful culture to more closely match the one they fled from.

We are in the opening stages of an all-out assault on every single value that makes America the place people have risked death to get to for centuries. Free speech? That is hateful, it must go. The right to keep and bear arms? That leads to mass shootings so it has to go. Private home ownership? Racist and bad for the environment. Eating meat? Also racist and bad for the environment, we must all eat soy and bugs.

Every single leftist cause, from feminism to LGBT "rights" to raising the minimum wage to "environmentalism", all have a single source and a unified goal of global Marxism. The cabal pulling the strings has been taking the long view for the better part of a century while the rest of us are fighting each battle in isolation. Our vision must match theirs. I will likely not live to see a reborn Western world but that doesn't stop me from fighting for that future for my children and posterity. Likewise our commitment must match theirs and along with it a rethinking of what we are willing to do.

There is no second place in this struggle.