Oh look, more awkward news from the Jersey City shooting! Now a pawn shop owner has been arrested, a nice fellow named Ahmed A-Hady has been arrested as a felon in possession of a firearm. Of course he isn't legally permitted to have a firearm but that apparently didn't stop him from possessing several. Weird, I thought more gun control laws would stop this sort of thing. From NBCDFW:

Federal prosecutors said they searched A-Hady's store and allege that while he admitted to owning two handguns purchased in 2007, he "falsely denied" they were there. (After a 2012 conviction on state controlled substance-related charges, he is no longer allowed to possess firearms.)

One of his relatives ultimately told authorities A-Hady had a safe at the store with guns inside. A search turned up three handguns there; further searches there and at his home turned up a total of 10 weapons and more than 400 rounds of ammunition, including some hollow-point bullets.

A-Hady now faces up to 10 years in prison on the charge against him. Attorney information was not immediately available.

Meanwhile we still don't know why the shooting started with a cop being shot in a cemetery and only then did the two shooters drive a short distance to the kosher market and opened fire. Police responded within a matter of minutes, which seems pretty fast to me, and in this video there are a number of plain-clothes cops with rifles leading the response, which also seems a little weird and makes me think there is more to this story than "just" a couple of black nationalist kooks shooting up a Jewish market, almost as if there was already a significant police presence in the area for some reason.... 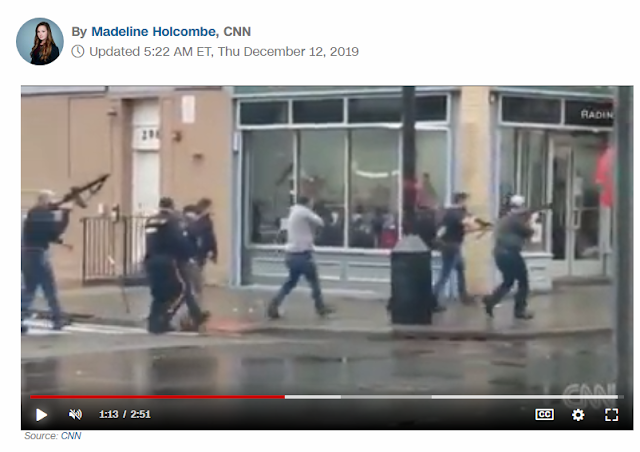 Makes you kind of wonder what really happened here. I have seen some pretty compelling stories on social media suggesting theories like this was a gun buying sting that went bad. The video above might bolster that claim. But like the Las Vegas shooting, I expect that whatever really happened will never be revealed.

De Blasio also responded to criticism that he’s called out anti-Semitism by white supremacists, but hasn’t criticized the same behavior from the left.

“Where has the worst actions before two days ago – and I don’t belittle what happened days ago one bit, I think that’s quite evident – where have the worst actions, the worst anti-Semitic attacks happened in the United States of America in recent memory?” he said.

“Pittsburgh, Poway, other parts of the country – and who were the perpetrators? Right? White supremacists. We know this. We know this. So, I think it is dangerous – I think there is a reverse political correctness going on here. Let me name it for what it is. If folks on the right want to play this game with people’s lives, I would say you should be concerned about that.”

“The historic danger to the Jewish people has come from right-wing extremism. That is a fact,” he said.

In New York, however, the 22 percent rise in anti-Semitic incidents over the past year is not linked white supremacists.

Of course it isn't, we have lots of video proof that non-whites are the ones attacking Jews. So in spite of the actual evidence, Bill wants you to believe that the alleged rise in antisemitic attacks is all the work of "white supremacists".

These people hate you, want you dead and have no problem lying about you in order to inflame passions against you. Ponder that.
Posted by Arthur Sido at 12:55 PM