Something Is Rotten In Jersey City

And I don't mean the general pervasive odor of garbage that pervades that entire region.

Six people were killed in what sounds like a crazy gun battle in the redundantly named Jersey City, New Jersey. As of this morning, only the police officer killed was named. Two of the gunmen killed by police are not identified, although some reports say one of the men frequently posted "antisemitic" remarks online and it sounds like the gunmen were targeting a Jewish owned kosher food market. Yesterday initial reports suggested the third gunman was on the loose and there was a description: 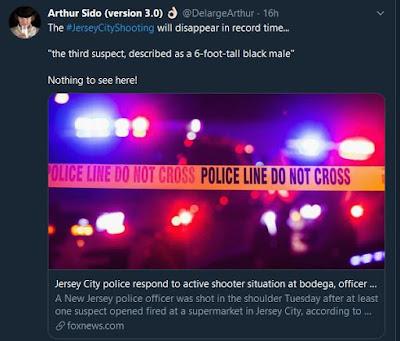 That same news story today doesn't make any mention of this suspect. The cops know who they are obviously as they have their online records that according to the New York Times this morning included by "anti-Semitic" and "anti-police" ranting.

Also from the news this morning:

The deadly violence erupted around 12:30 p.m., when authorities were alerted to gunfire at 223 Martin Luther King Jr. Dr., which houses the Jersey City Kosher Supermarket.

When cops got there, they were “immediately engaged with high-power rifle fire,” Kelly told reporters.

I assume that given the duration of the gun battle, the "high power rifles" were some sort of AR/AK variant. Also weird, from CNN this morning:

"We do feel comfortable that it was a targeted attack on the Jewish kosher deli," Mayor Steven Fulop told reporters, citing surveillance video showing the shooters driving up to the store, getting out and firing into the store.

Jersey City Department of Public Safety Director James Shea stressed authorities are not labeling the incident as anti-Semitic. "The motives are still part of the investigation," he said.

People with rifles that have allegedly posted "antisemitic" remarks online pulled up specifically to a Jewish run kosher store and opened fire but their motives are still unclear?

Other reports suggest there were "bomb-making materials inside the truck". That same report says that there was an initial description of the suspects:

Police suspected two shooters early on, Heavy.com has learned from scanner dispatch audio. “We saw two shooters get out of the van. We saw two jump out of that van and go in,” said an officer. The description was “black male and a black female” wearing all black clothing, possibly with rain or trench coats. That officer told the dispatcher it wasn’t clear whether both shooters were still inside the store, but police didn’t see either come out. However, as noted, later reports indicated they were likely two males, not a male and female. Both died in the store.

And also that the cop who died was killed in an "ambush".

New York Mayor Bill de Blasio announced that there was no credible threat but police were boosting protection for "key locations" in the Jewish community.

Like I said, something stinks here. The media seems to be tripping over themselves to avoid calling this a "hate crime" or "anti-Semitism". We have two dead suspects that no one is identifying although their identities are known. Most initial reports including police scanner traffic and later reports suggest the shooters were two black men, dressed all in black, with "high power rifles".

A couple of anti-Semitic, cop-hating black men who either targeted cops for assassination or targeted a Jewish run store. The media is being unusually cagey about motivations and identification which is usually a sure sign of a narrative failure.

Sounds to me like another story headed for the memory hole. Nothing to see here but in a city that brags about their "diversity", it appears once again that maybe that isn't our greatest strength after all.
Posted by Arthur Sido at 10:20 AM