It is the end of the year and that means the endless stream of increasingly desperate sounding email appeals for donations. Libertarian outfits like Mises Institute are no different. 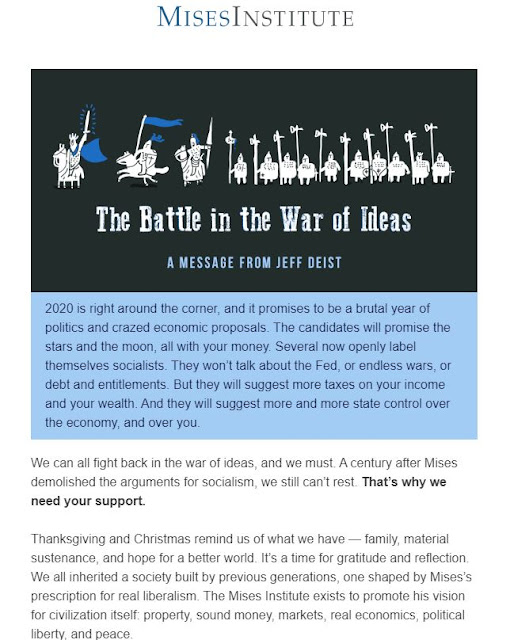 Yes, our society was built by previous generations shaped by the vision of a Jew who emigrated to the U.S. in 1940, over 160 years after the U.S. was established. The hubris of that statement is pretty breath-taking.

The bigger issue is that while socialism is poisonous and deadly, we are going to get it sooner rather than later. Not because we lack the better arguments, we have those in spades. No, the problem is that people like the Mises Institute are still arguing about issues and concepts when we are in a losing and pretty much lost war of identity and tribe. We lost the war of ideas half a century ago and we are entering the final stage where global Marxism mops up the last remaining holdouts.

Libertarianism in 2019 is like a football coaching staff whose team is down by two touchdowns, the two minute warning has sounded and they are out of timeouts but are still arguing about what color they should paint the locker room.

America has added tens of millions of new "Americans" who come from dysfunctional societies that have proven to be utterly incapable of forming or sustaining stable nations and who have neither the intellectual capacity nor the inclination to even begin to understand basic economic theory. They aren't good at much but they are great at having lots of babies and figuring out (with help) how to game the system. They don't want to leave America a more free and prosperous nation when the die, they want to get what they can while they can and the consequences for the future be damned. Thanks to the universal franchise, a Somali migrant with a 70 IQ, no job and a gaggle of kids on welfare gets the same number of votes that I do and they absolutely understand that they can use those votes to take what others have earned. Ilhan Omar is not going to be persuaded by clever theories and ideas from Mises, she is waging total war against the racial tribe she thinks are preventing her own people from being ascendant in America.

In 2020, the only ideas that are going to matter are tribal identity, survival and a hardening of our minds to contemplate things that were unthinkable a few decades ago. We can argue about economic theories later, right now our only concern must be survival. If we lose, freedom and liberty die forever.