A busy weekend. In Chicago the news popped of a mass shooting with 13 people shot. Right away some indications were showing up.

- 13 people wounded but no one killed. Nice shooting Tex!

- In the South Side neighborhood of Englewood which is 99% black.

Then we find out that the house party was a memorial for one Lonell Irvin, a would-be carjacker who was shot multiple times in the head while trying to carjack a concealed carry permit holder. Oops, should have picked a different car Lonell, or perhaps tried something truly novel like getting a job instead of robbing people.

Police reports say the shooting was sparked, as is so often the case, by a "dispute" that spilled out of the house and lead to gunfire. The police also are saying that people were being shot seemingly at random.

The incident stemmed from a dispute inside the home, Chief of Patrol Fred Waller said at a press conference Sunday morning. Shots were fired inside, and people scattered outside, he said. The gunfire continued as people ran out, with two people appearing to shoot “randomly” at those exiting the building. At one point the shots were aimed at someone in a vehicle.

When I get upset, my first response is to randomly shoot at people because I lack the basic self-control and ability to think about the consequences of my actions.

So you can pretty much assume that the victims and shooter(s) were all black, no NRA members were present and the guns used were almost certainly illegally owned by people with prior criminal records. In all, 38 people were shot over the weekend in Chicago with 5 of those being fatally shot. Most of the shootings seemed like targeted retaliations, people shot from vehicles or killed at home.

With warm weather predicted for the week, expect Chicago to see an uptick in shootings for the Christmas week. Also expect lots of yammering about the mysterious evil force of "gun violence" that is "plaguing our neighborhoods" and lots of "The NRA has blood on their hands" tweeting.

Meanwhile in 64% black Baltimore, another mass shooting happened at around the same time as the Chicago shooting.

At around 2 AM local time, seven people were shot waiting in line at the "iVilla Lounge". The news report leaves out the full name of the lounge which is the "iVilla Hookah Lounge". Their Instagram is chock full of pictures like this: 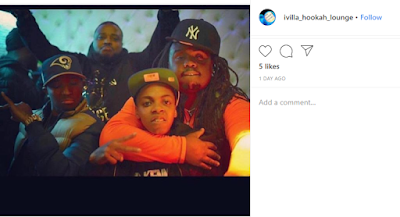 In this case, two shooters and 19 shots fired. Zero fatalities.

Two of those shot were reportedly 17. Now what exactly 17 year old teens are doing at a hookah lounge at 2 AM is none of my business of course but still I always wonder why people in this community never seem to connect that teens are shot in these mass shootings because they are hanging around with adults in the middle of the night on the street. The same report notes that this was far from the only shooting in Baltimore over the weekend:

This was one of eight shootings in the city this weekend.

The story is always the same. No one saw nothing, no suspect, no leads.

CNN reports that there was another mass shooting, this time in Spring Lake Park, Minnesota. You haven't heard of Spring Lake Park? Me either but it is a suburb of Minneapolis and is 83% white. So that seems a little off with 8 people shot but then you look at the police statement and see the shooting took place at the Dala Thai Restaurant and Banquet Hall and the names of those shot are:

So not a bunch of Nordic Lutherans.

At least there is a little diversity in this shooting.

Not an NRA member...

....or anything that would be stopped by any new gun laws....

Basically: gun control is an effort to disarm law-abiding white people because minorities can't stop shooting each other.

Merry Christmas indeed!
Posted by Arthur Sido at 8:32 AM