Another mass shooting last night, this time in New Orleans. The police seem confused about how many people were shot but the latest tally is 10. From Nola.com

A spasm of violence bloodied Canal Street in the early morning hours on Sunday, leaving 10 people shot in one of the worst mass shootings in New Orleans in years.

New Orleans police said that two victims were in critical condition after gunfire broke out in the 700 block of Canal Street just before 3:30 a.m. Few details were released as of mid-morning Sunday, but the street near the corner of Bourbon and Canal was littered with evidence markers that normally denote shell casings.
----
The mass shooting came at the end of a big night of revelry in and around the French Quarter as tens of thousands of visitors were downtown for the Bayou Classic football game between Grambling State University and Southern University.
----
Cassandra Beal tried returned to her room at Astor Hotel a few minutes too late Sunday morning.

Its front entrance was taped off for an investigation into the shooting that occurred just feet away from its doors.

The Southern University alum was in town for the Bayou Classic, just like she’s done for nearly a decade.

“Every year, this happens,” Beal said. “They need to do better with this area.”

This is the second mass shooting to occur on the weekend of Bayou Classic in recent years. In 2016, two men got into a fight and the resulting gunfire injured nine people and killed Demontris Toliver, a Baton Rouge tattoo artist.

For those unfamiliar with college football, the Bayou Classic is an annual rivalry game between Grambling and Southern, both historically black colleges located in Louisiana. New Orleans is one of the blackest cities in America, with the black population exceeding 60%. The police are giving us the "no motive, no suspect, no description, unnamed 'person of interest' in custody" dance that always leads to an unsolved case. Meanwhile, a mass shooting and crickets on social media. 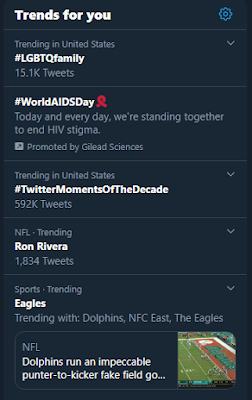 Pretty much every trend is some bogus forced "trend" about homos or NFL stuff, although that fake field goal, punter passing to place-kicker shovel pass touchdown was the coolest thing I have seen in a while.

Let's look at some facts.

Blacks commit over 50% of all murders in America.

Blacks commit around 75% of all mass shootings in America

Most of these shootings involve handguns, most of which the shooter obtained illegally.

The revelers were in town for a football game between two historically black colleges.

Add that all up and you get a black shooter or shooters. Southern Alum Cassandra Beal, quoted above, said "this happens every year". The 2016 shooting referenced above where a black "tattoo artist" was killed saw two suspects arrested and, yep they were both black. Get a large group of blacks together and the odds of someone getting mad at someone else, pulling a gun and spraying the crowd is pretty significant.

But please tell me more about how the almost all white and law-abiding NRA and her members are to blame for gun violence.
Posted by Arthur Sido at 6:02 PM