If you read my old blog you would come away with a couple of impressions. First I disdain almost all forms of institutional religion and second I despise the Mormon "church". The former because I think institutional religion is mostly self-serving and interested in preserving itself and the latter because I hate being deceived. So it was pretty juicy red meat when I saw this headline from the Washington Post:

The Mormon religion is one of the least transparent organizations around when it comes to finances. Local "wards" and "branches" take the collection and deposit the funds which are then mostly transferred to the main church accounts. No one knows what happens to it after that. In most Christian churches, the finances are pretty open for the membership to examine. That doesn't entirely stop fraud and foolish spending but it certainly is better than a black hole where your hard earned dollars disappear.

Each family is grilled annually over their "tithing settlement" which the official Mormon website describes this way:

Tithing settlement is an opportunity for each ward member to meet with the bishop to make sure his or her donations records are correct and to declare to the bishop his or her tithing status. It gives the bishop an opportunity to discuss with families the principle of tithing, encourage a generous fast offering, and discuss other financial and spiritual matters.

What this really means is you get called into the bishop's office, interrogated about whether you really donated 10% to the "church" and whether that 10% was net or gross of taxes and what that means for how "worthy" you are to attend the Mormon temples. Spoiler alert, if you only donate 5% you probably aren't "worthy" to attend the temple and scoop up those sweet, sweet "blessings" which include magic underwear and being daubed with oil while wearing only a tunic by some old dude.

But if you are a member, what you know about the finances of the "church" that demands 1/10 of your earnings is next to nothing. The funds are swept up by the "Administrative Office" in Salt Lake City and the average Mormon has no idea what happens to those funds and no say over how they are used. As it turns out, an awful lot of those funds aren't being used for anything but hoarding and occasionally bailing out Mormon businesses. From the WaPo:

A former investment manager alleges in a whistleblower complaint to the Internal Revenue Service that the Church of Jesus Christ of Latter-day Saints has amassed about $100 billion in accounts intended for charitable purposes, according to a copy of the complaint obtained by The Washington Post.

A spokesman for the church did not respond to detailed questions from The Post about the complaint. “The Church does not provide information about specific transactions or financial decisions,” spokesman Eric Hawkins said in a statement.

That isn't a typo:

According to this whistle-blower, the Mormon religion is sitting on an enormous investment fund that they pay virtually no taxes on. This graph from the article paints the picture: 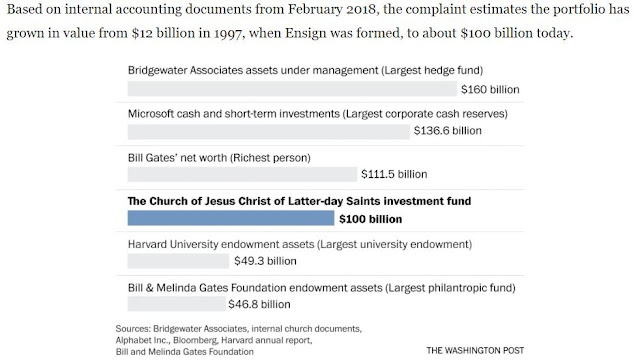 Double the size of Harvards endowment and the Bill & Melinda Gates Foundation? Holy crap! The way the exemption on taxes is supposed to work is that an organization must use their assets for charitable or educational purposes, not to just hoard the money and invest it.

Philip Hackney, a former IRS official who teaches tax law at the University of Pittsburgh, said the complaint raised a “legitimate concern” about whether the church’s investment arm deserved its tax-exempt status.

“If you have a charity that simply amasses a war chest year after year and does not spend any money for charity purposes, that does not meet the requirements of tax law,” Hackney said in an interview. Hackney, who served in the IRS chief counsel’s office, has been retained by The Post to analyze the whistleblower documents.

Also according to the article, the Mormon religion collects nearly $7,000,000,000 per year from their reported 15,000,000 members which is about $466 per member but as a former membership clerk I can confidently say that less than half of the reported "members" are active in any sense. You have to go to great pains to get your name off the membership rolls of the Mormon religion so there are a ton of people who haven't attended Mormon services for years and don't consider themselves Mormons who still are counted as members. By contrast, the Roman Catholic faith in the U.S. claims 170 million members, a similarly dubious claim, but only $8 billion in donations or around $47 per "member".

When we were members of the Mormon religion, we were very young with a rapidly expanding family because that is what you are supposed to do. We struggled to pay our bills and while you could get some aid from the church, it was highly embarrassing to do so. That didn't stop the bishop from calling us into his office annually to ask if we had proven our worthiness to God by giving money to the Mormon religion instead of paying our bills. Meanwhile the Mormon leadership was sitting on tens of billions of dollars that were allegedly being set aside for the "end-times":

In a speech in March 2018, Caussé linked the church’s financial strategy to the “prophecies about the last days.” Just as the church maintains grain silos and emergency warehouses, Caussé said, so it “also methodically follows the practice of setting aside a portion of its revenues each year to prepare for any possible future needs.”

Preparing for the apocalypse is a major theme in Mormonism. Unlike the almost-as-kooky notions of "The Rapture" where believers will be swept up before the end-times tribulations, Mormons expect to live through the tribulations and they set aside food and other supplies to weather the coming storm. You might notice a lot of survival/prepper outfits are located in Utah. I get why you would set aside grain and have farms and stuff but in a SHTF situation, what are you going to do with $100 billion in electronic assets?

I would like to say that Mormons are unique when it comes to hoarding charitable donations but that isn't true. In my years as a bank manager I had a lot of local Christian churches as customers and they were great because most of them were sitting on some large cash deposits. One customer was a local church with nearly a million in the bank, set aside for a "capital improvements" project down the road. Meanwhile the church was located in an economically distressed area in the middle of the last big recession so there were plenty of people who could have used some help, but the church leadership were mostly concerned with a new addition to their building that would sit empty most of the week. I did some snooping around way back in 2011 and I estimated that the Southern Baptist Convention was sitting on real estate worth over $40 billion with a "b" and that the SBC spends only around 10% of their "tithing" on mission work. The rest stays in-house to pay for clergy and buildings.

My general opinion is that institutional religion is to the Christian faith (and Mormonism is not and never has been Christian in any sense) as Conservatism Inc. is to the political Right. It is mostly concerned with keeping the hustle going and the more prominent the "leader", the more likely they are just a grifter who found a way to avoid gainful employment. The single greatest impediment to the spiritual growth of most Christians is their church. In Mormonism you have most of the worst aspects of institutional religion coupled with a culture of judgment, secrecy and cult behavior. It was not at all surprising to learn that the Mormon religion is sitting on a huge investment portfolio that is kept secret from the members. While Mormons are warned against investigating criticism of their faith too closely, I hope that many of them start to wonder why they keep putting money in the plate and suffer the indignity of being interrogated about their finances when their religious leaders are just hoarding those funds.

As a fun aside, I notice that the official website of the Mormon religion no longer is www.lds.org as it had been for a long time but now is https://www.churchofjesuschrist.org. No mention of the word Mormon or even the "Latter-Day Saints" in the web address. All part of the endless rebranding of the so-called Church of Jesus Christ Of Latter-Day Saints. It isn't really surprising that famous Mormon Mitt Romney emulates his religion by changing with every passing wind.