A Shocking Twist No One Saw!

The Jersey City shooters have been identified. The New York Post is reporting they are David Anderson and Francine Graham and that Anderson was once associated with the lunatic group known as the "Black Hebrew Israelites" who openly call for violence against whites.

One of the two shooters who fatally shot up a Jersey City Jewish deli in what officials say was a “targeted” attack posted anti-Jewish and anti-police messages to social media before the chaotic attack that left three civilians and a cop dead, law enforcement sources said Wednesday.

Sources said David Anderson, who committed the deadly Tuesday attack with a woman identified as Francine Graham, was a one-time follower of the Black Hebrew Israelite movement and made the hateful postings on his social media page.

Mr. Anderson as you would expect given his past associations is a 47 year old black male. 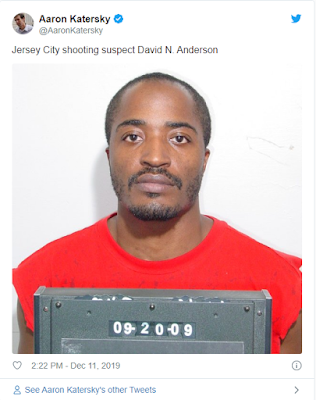 The Black Hebrew Israelite movement is one of the rare non-white groups labelled as a "hate group" by the SPLC.

Heavy.com, which is often one of the rare outlets that reports on inconvenient information, also reports that David Anderson has a lengthy criminal history:

Public records obtained by Heavy show that David Anderson had a criminal record. Anderson was charged in 2007 with felony unlawful possession of a handgun in Hudson County, New Jersey. He was arrested in December 2008 in Hudson County on drug and weapons charges, including possession of a weapon for unlawful purposes, specifically firearms, and unlawful possession of weapons, specifically an air or spring pistol. He was also charged with possession of narcotics. He was found guilty of a felony weapons charge and spent time in prison and on probation. He also had a previous arrest in 2004 in New Jersey.

Anderson, who has spent time living in Ohio and New Jersey, has also been arrested in Ohio. In 2009, he was charged in Portage County, Ohio, with criminal mischief, a misdemeanor, and pleaded guilty. He was sentenced to 30 days in jail. The case stemmed from a domestic violence incident in Kent, Ohio, records show.

Mutliple felonies including unlawful possession of firearms and he was in New Jersey which has very strict gun laws. Yet he managed to come up with firearms to shoot cops and some Jewish store owners. Weird.

As I said earlier, this story is going to disappear. A crazy black religious zealot who hated cops is not the sort of thing that advances the agenda, so down the memory hole it goes. But the fact remains that as usual violent crime is overwhelmingly concentrated in minority communities, a fact that is not only ignored but constantly misrepresented by the media who would have you believe that there a Klan members and literal Nazis running around America attacking black people.

The media is lying to you. Every minute of every day, everything they say is designed to warp your perception and replace reality with a fantasy.
Posted by Arthur Sido at 2:47 PM