There was yet another apparent Islamic terror attack in London on the iconic London Bridge today. According to the news that is slowly leaking out, it is shockingly an already convicted Muslim terrorist. From the Daily Mail:

London Bridge attacker was an Islamic extremist released from jail a year ago and 'still wearing an ELECTRONIC TAG': Killer broke free from a nearby prison rehabilitation event to go on the rampage that left two dead - before police shot him dead

Genius, take a convicted terrorist on a little outing in the hopes that will make him stop wanting to kill actual English people. How did that work out? Two dead is how it worked out, fortunately some English men charged the attacker in spite of him wearing a fake suicide vest and wrestled him to the ground until the cops showed up and shot the guy.

A few hours later we are getting reports of a similar attack in the Netherlands.

Detail are still being slowly released on that one, but the timing and the method all suggest another Islamist attack.

These are real attacks by real Islamic terrorists on real people. Meanwhile.... 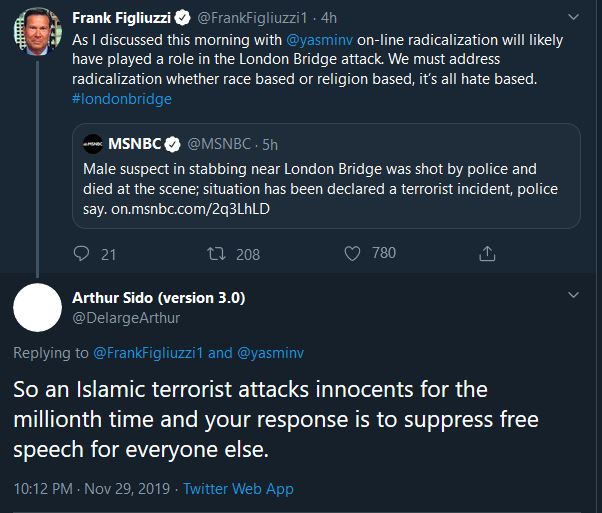 He isn't talking about monitoring the radicalization of Islamist terrorists online, he is talking about using these attacks as a pretext to monitor and suppress "hate speech". Look at how he couches his statement:

We must address radicalization whether race based or religion based, it’s all hate based.

What does race based "radicalization" have to do with this, other than this likely being a non-Western Muslim attacking white European out of racial and religious hatred?

We know for example that these "radicalized" Americans on the issue of race are, generally speaking, not attacking anyone and that when it comes to interracial violence, whites are overwhelmingly the victims of black crime rather than vice versa. If we trying to racially "radicalize" people online into committing violence, we are doing a pretty poor job of it. That doesn't stop the media and the globalist statists from pushing this phantom menace of "white supremacy" and nascent re-emergence of a short-lived 20th century political movement, namely "fascism", to scare people into abandoning their rights for the false promise of "security". CNN was in full panic mode over this scary report out of Italy:

Weapons and propaganda?! Oh my! Here are the weapons that are apparently part of this "arsenal": 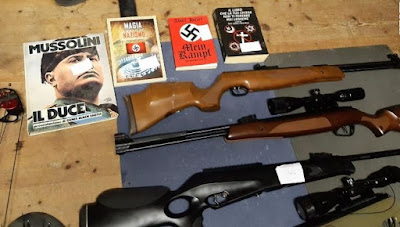 They look to me like pellet guns or air rifles, maybe .22 caliber rifles? Not exactly the sort of stuff that will allow 19 Italians to invade France. Although come to think of it, 3 pellet guns may be more than enough to conquer and occupy France...

Why would CNN have a story about this minor little raid on some irrelevant alleged wannabe Nazis when CNN itself admits no one was actually in police custody? This paragraph in the story gives us a little clue:

Authorities had been monitoring "extreme right-wing local militants" during a two-year investigation led by the Anti-Mafia and Antiterrorism District of the Prosecutors Office of Caltanissetta and identified a "vast and jagged galaxy of subjects" who shared the same "ideological fanatism," police said.

Two years "monitoring" less than two dozen people, including a 50 year old woman, and all they come up with are some books, flags and air rifles? Who cares about these people in Italy "guilty" of having some books? The answer to that is simple:

You are supposed to see this and have reinforced in your mind that there is a vast global conspiracy trying to resurrect "Nazism" and "fascism" and "white supremacy". We are breathlessly told that this is a real, legitimate threat. It really isn't. However it does serve a useful purpose as an excuse to clamp down on free speech and assembly. The state of Virginia is cracking down on people engaged in scary looking training. Slowly, day by day, we are being squeezed and the 1st Amendment is being gutted, which is not coincidentally why the 2nd Amendment is under endless assault. What keeps the government from completely shutting down websites and political speech is fear that moving too fast will wake up too many people, people who have access to a lot of guns.

These people never take a day off, every waking moment is dedicated to crushing you and replacing you with more compliant worker-consumer serfs. If your dedication doesn't match theirs, your fate will come at the last stop on the train to the gulag.

There is no second place in this struggle. Losing means complete destruction.
Posted by Arthur Sido at 7:05 PM