The Reds Are Marching On Indianapolis

Of course there is also the issue of teachers getting paid for only working around 2/3 of the year. Here in Indiana, the average school teacher makes a little over $50,000 per year. That is lower than some of the surrounding states but Indiana also has one of the lowest costs of living in America. So you live in a lower cost state, you get paid less. I worked for a global financial services firm back in the day and they had different pay rates for living in Kentucky versus living in New York City cuz, duh, it costs more to live in NYC. Getting the whole summer off is a huge perk, plus various teacher "workdays" throughout the year, holiday breaks, snow days when other people have to drive in treacherous weather to work, on and on. When a teacher makes $50,000 for working 2/3 of the year, it is the equivalent of getting paid $75,000 for someone who actually works 12 months out of the year and gets a measly two weeks of vacation. So STFU.

None of that stops school teachers from endlessly kvetching about how unfair their lot in life is, even though they all chose to be teachers knowing it allegedly doesn't pay that well, which isn't true, and despite education majors having some of the very lowest SAT scores of undergraduates by major. In other words, our best and brightest aren't becoming teachers.

So here in the Hoosier state, thousands of teachers are just deciding to not show up to work tomorrow and instead are going to Indianapolis to bitch en masse about how unfair it is that they don't make more money even though they get the entire summer off plus about another month of various holidays during the year. They are calling the event Red for Ed Action Day, no doubt mostly oblivious of the symbolism, and it means that half of all public school kids in Indiana are going to be home tomorrow, leaving a lot of parents to figure out something to do with their children, and almost certainly causing a huge hassle in downtown Indianapolis. So what exactly is it that they want? From the Indianapolis Star, Thousands expected for Red for Ed Action Day at the Statehouse. Here’s why they're marching..

ISTA has said it has three main goals for the action.

1. It wants an investment from the state in teacher pay.
2.  It wants lawmakers to make good on a promise to hold schools and teachers harmless from state test scores, which dropped sharply when the state introduced the new ILEARN test in the spring.
3. It wants a new professional development requirement repealed.

An investment from the state means more tax dollars from Hoosier tax-payers to increase the pay of school teachers that are already providing mediocre results in spite of endless increases in funding. This is one of the best charts on the topic, it is from 2013 but the trend has only been upward and is provided by the Cato Institute before they completely sold out on open borders. 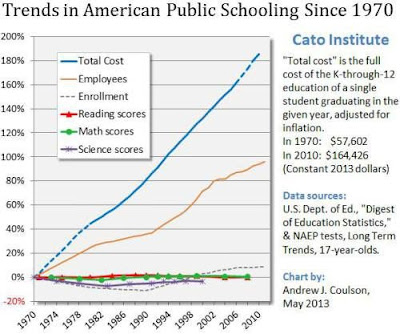 Since I was born, public schools have exploded in staff numbers and total spending, from an average of $57,000 to educate one pupil to an inflation adjusted $164,000 in 2013. For triple the cost, we are not getting triple the results. Scores have stayed mostly flat or declined. A big part of the problem is that school systems now have so many additional employees. When I was in high school from 1987-1990, the vast majority of the staff were actual teachers. We had a couple of principals, a couple of counselors, a school nurse (I think) and some secretarial and janitorial staff. Now school systems have hordes of bureaucrats that never teach a single day of the year but pull in huge salaries. Kids that are misfits are not disciplined, they are given special individual education plans and counseling. This leeches funding away from the average students and does little other than ensure cushy jobs for career education bureaucrats.

We already spend too much on public schools for what we get in return.

The second point is that teachers are freaking out because the state is expecting teachers and schools to do their jobs and educate the students they are given. The only way you can measure this is by standardized testing and since we aren't allowed to point out that some school districts have demographics that make it impossible for their students to keep up, we are left with using test scores. Teachers don't like being graded, which is pretty ironic. Sure you can't teach an idiot or a student who refuses to learn, but when it comes to the average student, they are falling behind and I have yet to see a proposal for how even more money poured into the bottomless maw of the public school system would change that.

None of this is "for the children", it is all designed to keep increasing teacher pay without any accountability, endlessly creating new "education" positions that don't interact with students and ensuring that teachers can settle into their jobs with job security unmatched anywhere outside of the Federal bureaucracy. The teacher's unions don't give a crap about educational performance, they are just in the business of keeping teachers employed so the union dues keep flowing, dues which are then used for political purposes that also have nothing to do with education and are at odds with the belief systems of most American parents.

The Red for Ed Action Day is just political theater designed to wring more tax dollars out of the state that will turn into union dues for the teacher's unions to then use to agitate for more tax dollars that turn into union dues. The whole thing is a giant scam and as Indiana's school children get left home tomorrow, the teacher's and their unions are going to benefit and the kids and the tax payers are going to suffer.

With all of the accumulated knowledge of mankind literally available to anyone while they sit on the toilet, we are facing graduating classes of public school children year after year that are dumber and less prepared for adulthood. You can thank the education establishment for that.
Posted by Arthur Sido at 8:00 AM