The Impeachment In Search Of A Crime

As the House holds sham hearings and bogus votes that idiots think is an impeachment but really is just a vote on rules about an impeachment inquiry, none of which is actually impeaching anyone, it is worth remembering once again the one and only thing you need to know about this whole farce.

The decision to seek to remove Trump from office was made as soon as he won. He has committed no crime, the infraction being punished is aimed at the 62 million people who elected Trump.

This is not and never has been an "impeachment" in any Constitutionally recognized sense. It has and remains the angry backlash of the American liberal establishment, which includes not only most of both political parties but also the media, Deep State and entertainment world.

House Speaker Nancy Pelosi is walking a tightrope here, trying to appease the anti-American, anti-white members of The Squad and her most rabid liberal base while recognizing that there is little chance of a successful impeachment and zero chance of removing Trump from office. She probably also realized that absent some sort of serious actual crime, removing Trump from office might trigger a serious and violent response from people who understandably would see that as a signal that our government is no longer of the people, by the people and for the people and feels justified in overturning election results they don't like.

What everyone needs to remember in an era of short-attention spans and even shorter memories is that Democrats didn't start talking about "impeaching" Trump over the Ukraine thing. They were talking about impeaching Trump as soon as he took office. 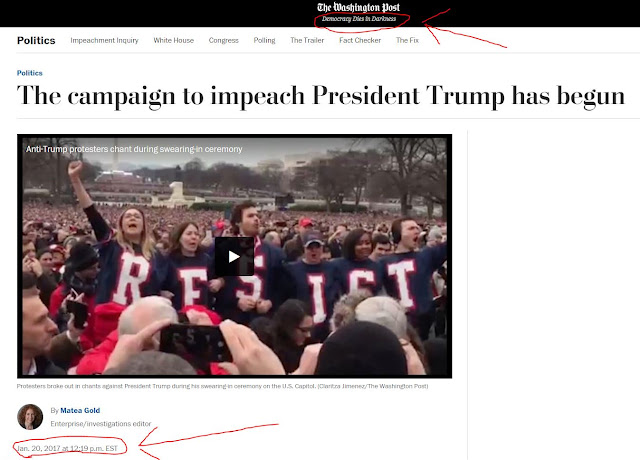 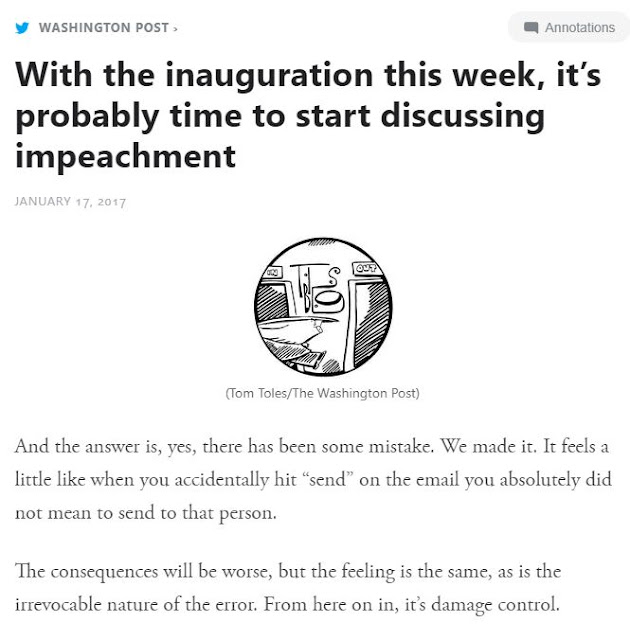 Trump was inaugurated on January 20, 2017. The day of and the days leading up to his swearing in, the Washington Post, newspaper of choice for the Deep State, was already talking about impeaching him. Clearly a "mistake" has been made and impeachment was intended to undo that "mistake". No one asked the people who voted for him, it was just assumed that their betters would fix what they screwed up.

The drive for impeachment was decided as soon as Trump was elected and it has always been a matter of searching for a pretext. For years it was the "Russian collusion" but that fizzled out and everyone realizes it was bullcrap. Then it was trying to get his tax returns, like Trump actually fills them out himself or does anything but sign the finished return prepared by a team of accountants. Then it was the "concentration camps" on the southern border that no one cares about anymore. Where is AOC weeping at the fence of an empty parking lot? Then it was the Ukraine thing.

Impeachment is a last resort for a President who commits some sort of significant crime in office, like Bill Clinton committing perjury in front of a grand jury. It isn't a mechanism to undo the results of an election you don't like.

Just remember, the decision to seek impeachment was made before Trump was even sworn in and was not based on anything he had actually done. What the Democrats are trying to do is tantamount to staging a coup.

If they succeed? Things will get ugly.
Posted by Arthur Sido at 1:49 PM