The Great Die Off

From 1946 to 1964, the United States experienced a massive increase in birth rate. During this 18 year time period, 76,000,000 children were born in America. This massive imflux of new children created a generation with the much maligned name The Baby Boomers.

The Boomers came into the world in an America at the apex of her global domination. Emerging victorious from the Second World War, the U.S. was virtually untouched by the ravages of war. The rest of the world was not so fortunate in 1946.

In Japan, the cities of Hiroshima and Nagasaki are the most well known examples of the devastation, victims of the world's first and last nuclear bombings but much of Japan was bombed into rubble or burned by firebombs.

Europe didn't fare any better. Both England and Germany suffered greatly from the bombing campaigns and as the U.S. entered the war, the bombing of Germany grew worse, culminating in the most infamous example of the destruction of cities like Dresden and Cologne. The advancing Soviets exacted vengeance on the German people cutting a swath of destruction and mass rapes in their path toward Berlin.

The Soviet Union was devastated as well. Over 20 million Soviet citizens perished and many cities were destroyed. Even worse, the Soviet regime was firmly in control of the entire Soviet Union as tens of millions of Russians, Ukrainians and Eastern Europeans would spend the next half century behind the Iron Curtain.

China was in the midst of a civil war as Chiang Kai-shek and the Communist forces of Mao Zedong fought for control of China, a war won by the Communists and starting the chain of events that would lead to the greatest mass murder in human history by the Communist government of China.

Americans were celebrating victory in Europe and Japan by shopping for new cars and having a ton of sex. 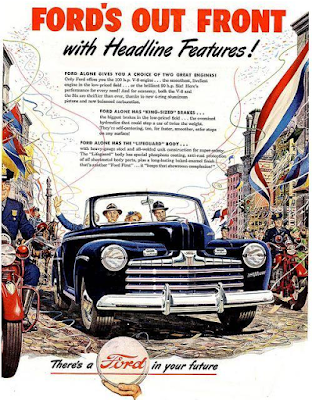 As World War II faded into the background, the 1950s rolled around and in America it was new appliances and new cars. While much maligned now, the 1950s were probably the best decade in modern American history, the days of Leave It To Beaver and Father Knows Best. The entertainment was mostly wholesome, families stayed together and we had it all.

The Boomers inherited a country that was unchallenged in prosperity. That was probably their biggest obstacle. They were coddled and marketed to and flattered from birth. They didn't protest the Vietnam War because they were opposed to it on principle, they opposed Vietnam because they were soft and cowardly.

By 1964 the last Boomers were born and the first Boomers were becoming adults. America was already a mess. We were hopelessly entangled in Vietnam. America's cities were burning in a series of race riots. President John F. Kennedy had been assassinated the year before in 1963. Within a few years, Malcolm X and Martin Luther King, Jr. would be assassinated and then President Kennedy's brother Robert. In 1973 Roe v Wade created a "right" to abortion out of thin air and with the advent of legalized abortion and birth control, the sexual revolution took off and degeneracy started to crawl out of the shadows. The Civil Rights Act and the "War on Poverty" would destroy the already fragile black family. Unbeknownst to most, while the country was still overwhelmingly white, the 1965 immigration "reform" act would set the wheels in motion for where we are today, a rapidly dividing nation turning into warring tribes along racial lines.

As we careen like a toddler down a staircase toward 2020, the Boomers are an often vilified demographic. The big knock I have against them is that they squandered the world they inherited. When Boomers were coming of age, America was landing men on the moon. As they enter senior citizenship, Americans are pretending that men who wear panties are not insane and are in fact really women. In their never ending quest for amusement, distraction and entertainment, they surrendered our civilization in return for false security. They don't seem to care what happens to their posterity as long as no one interrupts their comfort.

Let me interrupt a moment to point out that, yes I understand that not all Boomers are like this, but we are speaking of the averages and looking at them as a whole. See NAXALT.

As momentous and significant as the Baby Boom generation coming onto the scene was, we are poised now to see the opposite and it will be just as paradigm shattering. The oldest Boomers are now running into the end of the actuarial table and they rest will be soon.

The advent of the Baby Boomers corresponded with American ascendancy and the exiting of the Boomers will be in tandem with the final death throes of the American experiment. Whatever the new North America looks like, it will bear very little resemblance to the America at the pinnacle of her power and glory when the Baby Boom began. We have never had the massive influx of babies that we saw in the Baby Boom, 76 million of them!, but we also have never had a massive wave of deaths we are about to experience.

Much of the nation's wealth is concentrated in the portfolios of the Baby Boomers and as they die off, there is going to be a massive transference of wealth. You can be sure that the folks in the halls of power in D.C. are greedily licking their chops, trying to come up with ways to extract as much of that wealth as they can.

The Census Bureau has some pertinent information in this graph. 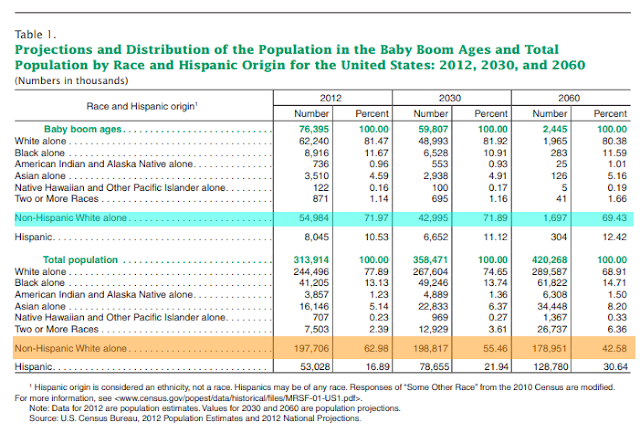 Of course it would follow that the children born to those parents would likewise be mostly white. By 2030, according to these estimates, the remaining Boomers will be almost 72% white but the nation as a whole will be only barely majority white, 55%. It is quite likely that is far too generous but regardless of the exact percentage, a large chunk of America's heritage white population will be found in the generation cohort that will be rapidly dying off. In other words, as the Baby Boomer death rates start to accelerate, so too will the demographic shifting of the United States. With white birth rates below replacement in every state and with mass immigration continuing unabated, no thanks to "America First" Donald Trump, the demographic shift from a white super-majority to a majority-minority nation is going to happen swiftly.

The U.S. is on the verge of a mass extinction event but it won't be blamed on an asteroid hitting the earth. The generation that came in with a bang is going to go out with a whimper and for all of their flaws, when the Baby Boomers die out, America will die with them.
Posted by Arthur Sido at 9:42 AM