Striking Another Blow For Limited Government!

Kentucky held themselves a li'l ol' election last night and it looks like Democrat Andy Beshear defeated the incumbent Republican Matt Bevin. Keep in mind that in 2016 Trump won Kentucky by 62.5% to 32.7%, which is about a 30% gap and Trump showed up to campaign for Bevin. A lot is being made of this by the mainstream media, and understandably so, but something that jumped out at me was this: 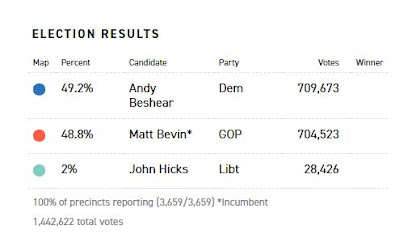 John Hicks was the Libertarian candidate and as I have stated before (see: Libertarians As Spoilers), the Libertarian Party in America serves only as a spoiler and often costs Republican candidates the win because we live in a de facto two party system. You might not like it but that is what it is unless we are going to rewrite the Constitution at the Federal and all 50 state level.

So congrats once again to the Libertarian Party for helping to elect another Democrat! That will go a long way toward increasing individual liberty.
Posted by Arthur Sido at 12:06 PM