Religious Wars Will Cripple The Right

No one really knows. There isn't a dissident right political party, there are no dissident right candidates for national office so we can estimate our numbers by vote totals or by registered voters. We can look at things like how many followers some people have on social media but that is pretty inexact. Someone like Ramzpaul for example, he has around 58,000 followers on Twitter and almost 73,000 subscribers with over one million views on Youtube. American Renaissance claims over 117,000 subscribers on Youtube but has been banned from Twitter. I have no idea how many unique visitors per month Vdare and American Renaissance get, the Zman said a few years ago that he was getting around a million per year with 45,000 regular unique visitors. I am sure that is much higher now. Vox Day claims to get even more than that but I don't really trust anything he says.

But what about someone like Ann Coulter? She is on the right side of the immigration issue and she has over 2.2 million Twitter followers. Paul Joseph Watson over one million. Mark Dice has half a million, Stefan Molyneux almost that many. Ann, Paul, Mark and Stefan wouldn't call themselves dissident right but they often say things that are often outside of the acceptable Overton window for "conservatism". Add in some of the other fringe characters like Sargon and Milo, neither of whom I care for, and you are getting a big audience who at the very least are open to some of the ideas of the dissident right, ideas that get you shunned in the Republican party (see: Steve King) and cause fits of apoplexy from dimwit mouthpieces like Charlie Kirk and pseudo-intellectuals like Ben Shapiro.

Then of course you have President Trump, who received over 60 million votes back when he was Candidate Trump and talking about building a wall and putting America first.

There are also lots of people who agree in principle with most of the dissident right, even if they have never heard the term dissident right and never read the websites or watch the videos or listen to the podcasts from the dissident right. Millions upon millions of Americans voted for Trump in 2016 because they realized that failure to get control of our southern border means a radical reshaping of the United States to the detriment of all of us. While almost no one was saying it out loud, tens of millions of people instinctively understood that replacing a super-majority European descent people with a collection of large blocks of minorities was going to lead to a completely different, and worse, nation.

So there are a ton of people who are on the right, whether that is the Dissident Right or more Tea Party focused types, the Gun-Right which is very large, the religious Right, the immigration patriot Right, what have you. In spite of huge numbers and a significant number of politically astute, engaged and active people, the Right seems to always be on the ropes. Why is that?

It is partly because so many of us have been conditioned over the years to see any hint of "racism" or "sexism" or "Islamophobia" as the worst sin imaginable. "Conservatives", especially in leadership and prominent positions, are constantly policing the ranks for any hint of naughty speech and will toss a wrong-thinker overboard at the drop of a hat. Most conservatives are in terror of being thought to be "racist" so they steer clear of anyone that might taint them by association. You can't blame them entirely, being in the wrong company can get you fired from your job and that is the second worst thing that could happen to a conservative. Maintaining their financial stability is more important than the fate of the nation.

Another part of the issue is that while the Left is inexorably moving toward state centralization and it doesn't matter what area they are moving the needle on at any given moment, the Right is defending a myriad of different fronts simultaneously. If the Germans knew exactly which beaches the Allied forces were going to land on and the exact day well in advance, D-Day might have ended quite differently. Instead they were forced to defend a huge area. We are doing the same thing. We protect gun rights and the Left goes after the traditional family. We turn our attention to that and they are pushing "climate change". We pivot to that and they move on to a higher minimum wage. The Right is constantly chasing after the latest assault and by the time we muster ourselves, they move on to something else.

The bigger issue right now is that the Right is so terribly splintered. We have a lot of very smart people on our side of the divide, people who read and think a lot, but that also means we have a lot of people convinced that their pet philosophy is the only way forward and anyone that doesn't subscribe to it is cast into outer darkness. What is worse, a lot of people go out of their way to antagonize people who are on the same page with 95% of stuff and that leads to endless and fruitless arguments. This is a great example: 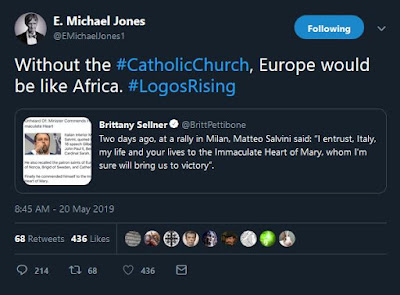 E. Michael Jones is kind of a fringe figure on the Right. He says some smart stuff but then he says dumb stuff like this. He got a ton of pushback on it, including from me, that called B.S. on that idea. My point is what it always is. Africa is like Africa because it is full of Africans. Europe is like Europe because it is full of Europeans. Move all of the people of European descent into Africa and all of the people of African descent into Europe and within a generation Europe would be a wasteland of rotting cities and mass graves and Africa would be the technological and economic powerhouse of the world.

His argument is easy to refute but it opened a lot of old wounds and that doesn't help anyone. I don't care all that much if someone is Christian or Catholic or Mormon or a druid or an agnostic or wears Thor's Hammer on their neck. Are they with me in preserving my civilization and culture and defending my people? If yes, then they are on my side.

Too many people on the Right insist that you not only support your people but that you also convert to their faith. That is counter-productive. The Right is not an explicitly Christian movement and just being honest there are a ton of far-left, anti-white, self-loathing leftists who call themselves Christians. Then again there are a lot of really smart, really energetic people on the Right who are also devout Christians. Many mormons are great people, right-wing as the day is long but there are also lots of Mitt Romney's and Harry Reid's.

The Left seems to understand this a little better. Yes, they have battles on their side but they are more focused than we are because they have identified their enemy: white people. They understand on some primitive level is that there will be time to fight their big battles out once they vanquish white people. Of course they all assume that their pet philosophy will win but they are still focused on a common enemy.

Who is the focal point of the Right? Well "liberals" but that term has lost any real meaning, and now is just an amorphous concept of the boogeyman that is responsible for Bad Things and that can be defeated by electing enough Republicans. So who is our enemy? Mestizos? Blacks? Jews? Feminists? Homos? Trannies? Muslims? Asians? Socialists? Communists? White urban liberals? Collaborators in the Republican Party like Mitt Romney and Charlie Kirk?

We don't have a focus and worse, we don't have a singular unifying principle that unites us. We all sort of know what it is, preserving Western/European/white civilization and people, but most of us can't even bring ourselves to say that. I wish all the best for Africans in Africa and Asians in Asia and mestizos in Central America. I don't wish them ill at all but my concern is my people. That is true for most of us.

What this all really comes down to is this: we don't need narcissists and egomaniacs and asshats causing needless division in the Right. What is more, I generally assume at least half of the people who are always causing trouble are probably being directed to do so and being compensated for it. It is pretty easy to create a bogus account on social media, throw a groyper avatar on the account and start causing trouble.

People's faith is a deeply personal matter. Poking at the faith of other people on the Right, whether stupid Deus Volt memes from TradCaths or calling Jesus a semitic zombie, just simply doesn't do anything to advance the causes we are all supposedly concerned with. I spare no effort in pointing out the violence of Islam but Islam is a violent anti-Western, anti-white religion that has been warring against white people since it was spawned in some cave in the desert. It is incompatible with any sort of right-wing, European based political philosophy and system. But for the rest of us there needs to be room for people on the Right from all sorts of faith traditions. Whether you read the Bible or Julius Evola or whatever, I don't care. Just don't use your faith as a wedge to destroy our already fragile movement because if the Left wins all of us, Catholic and Christian and pagan and agnostic, lose.
Posted by Arthur Sido at 3:31 PM