Putting The Libertarian Cart Before The Identitarian Horse

Andrew Torba, the founder of Gab, one of the only truly free speech platforms around, tweeted this out yesterday: 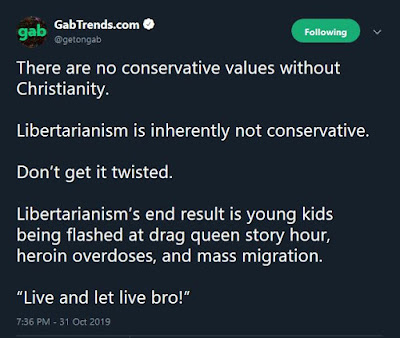 Whatever you think of that statement, and I disagree with some of it, it is just a statement of opinion. Andrew is expressing what we call "free speech", the very thing that Gab stands for. Andrew is a Christian and is making a statement that is both religious and political in nature, the speech given the highest protection in our Constitutional Republic. Notice what he is not saying. He is not saying "If you disagree with me you should be censored". Nevertheless a bunch of "libertarians" flipped out and publicly rent their garments, donned sackcloth and ashes and vowed to stop supporting Gab because the founder of a free speech platform was personally engaging in free speech. That sounds like modern libertarians alright.

A lot, not all or perhaps even most but a lot, of people calling themselves libertarian are simultaneously arrogant about how right they are and also incredibly thin-skinned. That twitter dust-up was a perfect example. I don't recall where being the founder of a free speech platform means you can't speak your mind using the twitter account for the platform that you created from scratch.

My main problem with libertarianism and the big reason why I, like so many others, dabbled for a few years with the libertarianism but eventually moved beyond it is that as a political theory it makes sense in a theoretical sense but utterly falls apart when it moves beyond theory. The main reason is that libertarianism doesn't understand basic human nature. Humans are inherently self-interested. That is not a bad thing. If someone is trying to kill me, I will try to kill them first because me surviving instead of them is in my self-interest. Self-interest gets a bad rap but it is the most natural instinct among humans or any living thing. Most people pursue self-interest within  the acceptable boundaries but many people don't and that is where the problems start for libertarianism. There is a reason that even on their best showing libertarian candidates only get a small percentage of the vote. Even in 2016 with two candidates with huge disapproval, Libertarian Gary Johnson garnered less that 3.3% of the vote. People just don't want a libertarian system.

Modern libertarianism means open borders, legal drugs of all sorts, drag queen story hour at the public library and "gay marriage". No thanks. Yes it theoretically means lower taxes and unfettered gun rights but that is not the sort of thing libertarians are focused on today. I've pointed this out several times, for example in this post Open Border Libertarianism Is Self-Defeating about open borders ensuring that our nation runs at full speed in the opposite direction from libertarianism, and in this post, The Libertarian Party Jumps The Shark, where I pointed out the irony of the Libertarian Party posting a photo of non-white people who would vote for the opposite of libertarianism at ever opportunity. The post from the LP even included the liberal mantra "Our diversity is our strength" even though our diversity doesn't like libertarianism.

Liberals want an ever expanded social safety net. Actual conservatives are interested in preserving values, hierarchy and authority, and a stable and orderly society. The people who actually want a real libertarian society? Not very many, and even the couple of percentage points of voters who vote Libertarian are usually some sort of protest vote. I wouldn't let Gary Johnson drive a car I was in much less want him as President but when faced with the choice between vile Barack Obama and the oleaginous Mitt Romney, Johnson served as a safe protest vote. Libertarianism will never expand past a tiny political fringe because most people don't want it and to compound matters most of the Beltway libertarians are open borders fanatics which directly works at odds with instituting a libertarian society.

The other big problem with contemporary libertarianism is that it isn't operating in the world we live in. The political landscape for the forseeable future is going to be entirely about tribal identity. You can lament how terrible this is but being sad doesn't change facts. Most non-white folk realized this a long time ago and more and more white people are starting to wise up.

Tribal identity is as old as mankind.

I have never been to Poland or Ireland but I still instinctively care about both nations as that is where my family is from. And yes, I care more about the well-being of Poles than I do about the well-being of Bangladeshi. Guess what, people living in America from Bangladesh care more about their fellow Bangladeshi back home than they do about Polish people living in Poland. That is the most natural thing in the world.

If you want a mostly libertarian society that values individual liberty and property rights, you need a high trust society and that demands a mostly racially homogeneous society.

Racial homogeneity is not a sufficient condition for an individual liberty and property rights respecting society but it is a necessary condition. The basic tenets of libertarian thought didn't come about organically anywhere but European societies. The only people who advocate for libertarianism are white or Jewish people, Thomas Sowell notwithstanding. It doesn't make much sense to assume that people that never developed these principles and that don't embrace them now will suddenly become libertarian when they step foot on America's magic dirt and read a few position papers from Cato. 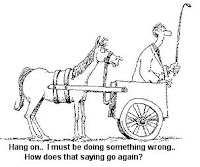 Libertarians are putting the specific policies they want ahead of forming a society where those policies can flourish, the old cart before the horse error. I verified with some Amish friends that this will in fact not work.

I don't mean to be cruel to libertarians. I went through a libertarian phase myself and it seems to me that most of the dissident right did as well, those LARPers who claim they always were DR are generally lying. The path many of us have walked is one of generic conservatism that eventually dawned on the realization that the GOP is useless, conservatism hasn't conserved anything of value and our "leaders" are grifters who are only interested in keeping their cushy gigs so they don't have to get real jobs. If you watch modern "conservative" thought today, you mostly get Jonah Goldberg and David French, Mitt Romney and Charlie Kirk, plus MAGA drag queens and homosexual black guys who are The Real Conservatives™. So we tried out libertarianism thinking it would be the path toward truly smaller government and just being left alone but then we realized that libertarianism is full of loons and weirdos. Gary Johnson is about as dynamic a leader as a bowl of oatmeal and his running mate Bill Weld was even worse, plus Weld is about as libertarian as Bernie Sanders.

So we eventually realized that literally every other racial and ethnic group in America is:

a) Basing their votes almost entirely on racial/ethnic solidarity

b) Doing whatever they can to keep white people from doing the same thing they are doing. 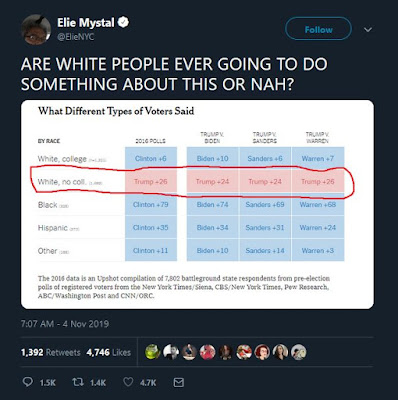 What are we supposed to "do" about this? Did this guy look at the black vote in 2008 and 2012 where blacks voted almost unanimously for Barack Obama and say "ARE BLACK PEOPLE EVER GOING TO DO SOMETHING ABOUT THIS OR NAH?" 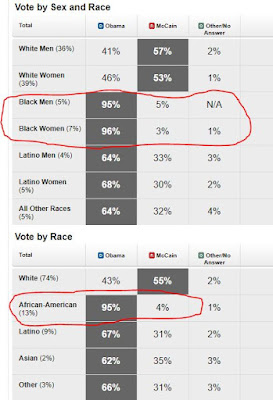 Two out of five white men voted for Obama. 95 out of 100 black men did. I posed this very question and picture back to Mr. Mystal, I assume I won't get an answer/will get blocked.

Blacks form voting blocks based on race and vote accordingly, Democrats don't really even have to try very hard to get their votes. The black vote is by far the most locked down and monolithic in America but no one is supposed to notice. Jews do the same thing and vote overwhelmingly for Democrats in spite of Republicans fawning over them and demanding endless funds and wars to benefit Israel. Mestizos even have groups like the National Council of La Raza, where "La Raza" translated literally means "The Race" and that organization gets one quarter of their funding from the Federal government! Asians are quieter about it for now but that is rapidly changing. Muslim groups have started getting more vocal now that we are 18 years from 9/11 and with radical Muslims like Keith Ellison and Ilhan Omar on the national political scene, the Muslim voting bloc is going to get even more influential. Sure Muslims hate Jews and homos but they will tolerate them for now until Muslims hit critical mass, and then the gays start to hit the pavement after being tossed from buildings.

Libertarians are laser focused on esoteric political theories. Everyone else is worried about protecting their own people. We are in a fight for our very survival and the survival of civilization and libertarians are explaining why drag queens are essential to a healthy society.

Maybe someday we will get things back in order and then we can talk about libertarian philosophy as if it is serious but right now libertarians are bringing a copy of Reason magazine to a knife fight.
Posted by Arthur Sido at 1:49 PM