It must be tough writing satire these days for the guys at the Onion and the Babylon Bee. Anything you can imagine is probably already being presented as truth by the media somewhere. The latest reminder comes from a hack named Paul Waldman, writing for The Washington Post which ominously warns that "Democracy Dies in Darkness" while spending the last three years trying to subvert an election. Here it is: 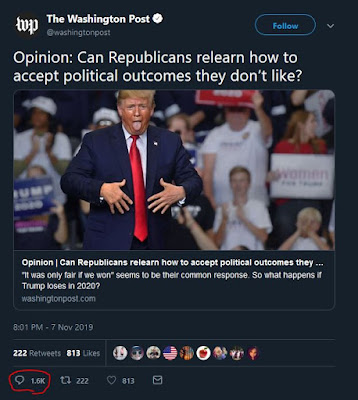 Yes really. The Left and especially the mainstream news, like the Washington Post, have refused to accept and abide by the election results from 2016. Non-stop attempts to whip up "impeachment", obstruct Trump's agenda and even mutterings about a coup have been going on since election night when stunned East Coast liberals realized that the pesky rest of the country gets to vote as well, an intolerable situation they have plans to change

The author of the opinion piece, Paul Waldman, is the prototypical bubble-dwelling liberal, a far-left Jewish "journalist" writing for and living among the power elite in the D.C. area. I am sure he doesn't even see the irony of what he wrote, hell the guy is still repeating the nonsense that corpulent black liberal Stacy Abrams actually won the Georgia governor's race in spite of the little problem of receiving fewer votes. To be specific, when Republican Matt Bevins who just lost the Kentucky governor's race asks for a recount, it is an assault on democracy. When Stacy Abrams does the same thing, she is heroic and brave. The difference to Waldman is that Bevins is a white Republican and Abrams is a black Democrat and that means the standards are different.

Just read this sentence and try not to belly laugh:

Instead, what is far more likely is that Trump would not have to be physically removed from the Oval Office, but would — starting immediately after Election Day and continuing into his post-presidential life — undertake a campaign to discredit the results.

That is literally what Hillary Clinton and her cronies in the media have been doing every single day since the 2016 election. As usual we see the Left accusing others of the misbehavior they themselves are guilty of. He even manages to insert a Russia comment although every modestly normal Democrat has shushed up about that farce, moving on to Ukraine.

It has been another banner week for the media. From this absolutely hilarious hypocrisy to the media essentially victim-blaming the Mormon women and children in Mexico for getting killed, raped and abducted by Mexican drug cartel thugs, the media never fails to set new lows for themselves and further cement in the minds of regular Americans that they can't be trusted to even report the most basic facts of the news.
Posted by Arthur Sido at 11:30 AM