How Do People Still Not Get This?

One of the greatest challenges we face, and one of the most frustrating hurdles to getting people to wake up, is that most white Americans live in a fantasy world. By "fantasy world", I mean they think they are living in a different country than they really do. Mostly this means they are dwelling in an idealized past, one that mostly never was real but that they desperately want to get back to. Boomers and Gen Xers grew up in a different America and think that if we try really, really hard and think really positive thoughts we can go back there. We cannot. At least we cannot without going through the crucible of fire and blood.

People my age and a little older still think we live in a world where Schoolhouse Rock was a documentary series for kids, rather than wanton propaganda.

Many still have this sort of nostalgic view of immigrants and think that a migrant from Somalia or El Salvador is the same as migrants from Poland or Italy. Even when virtually all migrants were from Europe, we were never a "melting pot". It took most of the 20th century for the U.S. to get to a place where ethnic suspicion and sometimes hostility between European ethnic groups faded.

The people coming to the U.S. now are coming from socialist nations, assuming they have any sort of functioning government at all. They see America as a place where they can get free stuff and not get murdered in the streets by drug gangs. They aren't coming here drawn by the promise of individual liberty and freedom, America to them is a giant piggy bank. They are going to shake all of the money they can get out of her and when they can't shake anymore out they will break the piggie bank to see what is left. They don't give a crap about freedom of speech. They don't have any connection to our culture and history, the opposite is true as they have been taught that the people who created this great nation that they sought to move to were racists and genocidal xenophobes who should have their history erased and be replaced by a new and improved America.

I ran into this again in the comments of a article on the Mises Institute (a libertarian outfit) titled: 4 Reasons Why Socialism Is Becoming More Popular. I pointed out that the article completely missed the main issue and the reason socialism is growing more popular is that we are replacing our people who value things like individual liberty and freedom with people who come from socialist countries and kinda like socialism. As the country changes demographically, we will continue to move away from what we assume were the founding principles of America, liberty and opportunity and freedom, and toward a more centralized and intrusive state. This garnered a few responses, ranging from the "immigrants are natural conservatives" to "nuh uh!". As I pointed out, the statistical evidence is pretty clear.

- Most new immigrants since 1965 and increasingly in the last few decades are non-European.

- Non-European, in other words non-white, people in the U.S. vote overwhelmingly for Democrats.

- Immigrants that have been polled consistently identify with Democrats.

This chart is pretty typical: 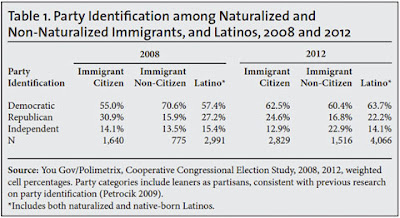 It comes from this piece at the Center For Immigration Studies, Immigration's Impact on Republican Political Prospects, 1980 to 2012. The non-white vote is at least 2-1 in favor of Democrats and that is true whether you are looking at Muslims or Jews, blacks or Asians or mestizos. In other words:

The exception might be Cubans but they are losing out to other Hispanics in terms of sheer numbers, even in Florida.

This means that for every 3 million new immigrants, Democrats pick up an additional net one million rock-solid voters. Why do you think Democrat politicians and liberal pundits are so desperate to keep the border wide open and yammer about "diversity is our greatest strength" while personally doing all they can to be insulated from non-whites? Because they know the path to a permanent liberal majority is centered on mass migration.

The Washington Post wrote about this in a recent story: Two versions of Texas collide over gun measures and mass shootings

The two versions are pretty clearly white, native Texans and new, non-white immigrants. From the article:

Now, Republicans who control the state are under pressure to implement gun-control measures that they’ve long spurned, ones conservatives in other states embraced following mass shootings. Continuing to ignore those calls could mean losing political power as rapid growth and accelerated diversity are defining a new Texas. Acceding to them, however, means angering what’s left of the old Texas, and the powerful gun supporters it has long accommodated.

The key passage is highlighted in red. A "new Texas" that is not Texas in any recognizable sense.

The article goes on to quote "Texans" with names like Namrata Chand and Dhruv Patel. Pretty clearly not stereotypical white Texans and clever choices for the WaPo to not quote people named Juan or Manuel. Texas is changing rapidly demographically and that means it will inevitably change politically. While our largest state of California becomes more entrenched as a liberal stronghold, the most politically powerful conservatives state is on the verge of being lost to the Left and it is all about demographics.

VDare ran several pieces that exposed the hoax that what led to places like Virginian turning blue was suburban anger at Trump. While there is a lot of that in the Northern Virginia suburbs populated with wealthy liberals dependent on a huge government for employment, the demographic change is what tipped the scales between suburban, blue Virginia and rural, red Virginia. Here is a good analysis: Immigration, Not White Suburbs, Turning VA Blue. GOP Still Can Win With Sailer Strategy—But Ultimately Needs An Immigration Moratorium

Meanwhile we have grifters and controlled opposition figures like Charlie Kirk wanting to give permanent residency to any foreigner that graduates from a technical field as if that is a "conservative" idea, even though he and everyone else knows that they won't vote Republican and they will have a significant number of kids who also won't vote Republican.

In most places the GOP is going to start to rapidly shift their positions on critical issues like abortion and gun rights to preserve some electoral viability for as long as they can. That means the Republican party is going to expect conservative voters to show up to vote for corporate tax cuts and deregulation while the GOP capitulates on the issues that drive conservatives voters to the polls. I think taxes should be lower and regulation should be lighter but I am not going to get fired up for those issues. Most of us won't. So the Republican Party will keep moving left to find new voters and the death spiral will accelerate until there are only a small, impotent minority of Republicans in elected office.

It will all be because of demographics.

White, conservative voters have more kids than white liberals but not nearly enough to offset the millions of new Democrats we are importing. The Democrats have hitched their electoral horse to demographic change and the dirty secret of American politics is that they were right and have already won.

We don't have the luxury of living in the land of make-believe. This is the world we live in and the future we face, and the longer we pretend otherwise the worse the landing is going to be.
Posted by Arthur Sido at 4:04 PM