Halloween is turning into quite a fiasco this year. We had the Twerk Or Treat Halloween party in Texas. Then there was an apparent Halloween party in Long Beach, California where 12 people were shot, 3 fatally. Good thing California has time to spy on citizens shopping in other states instead of dealing with actual criminals in their own state. Now there was a mass shooting in a little town called Orinda in California. Orinda is a sleepy little town, there was one murder in the last four years and it was named the 2nd friendliest town in America. The town is overwhelmingly white with a significant Asian population, about what you would expect from a suburb in northern California. The shooting took place at a very expensive (well over a million dollars at the last sale) home being rented out via AirBnB for a "small get together". That wasn't what actually happened. There was an instagram post about a party that has since been deleted. 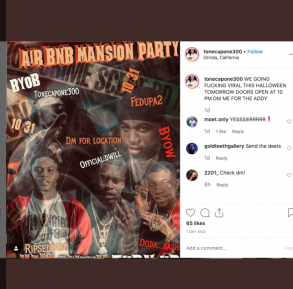 BYOB and BYOW, bring your own beer and weed. A short video purporting to be of the party made the social media rounds. The video is on a British news site, not an American, because we wouldn't want people to watch the video and draw the wrong conclusions.

So yeah, a nice quiet party of "college age" folk just having a good time, with a little weed thrown in for good measure. Unless every black kid in Orinda was there, it looks like this might be a party of out of town "youths" renting a swanky place to trash.

The party lasted about an hour, as the cops were on their way for noise complaints (the house is on a little winding cul-de-sac on a hill so I am sure there were cars all over the road). Before the cops showed up, the party turned into a shooting. At least 5 are dead.

A fifth person has died as a result of a Halloween night shooting at an Airbnb rental in Northern California.

The Contra Costa County Sheriff's Office announced late Friday night that 19-year-old Oshiana Tompkins of Vallejo and Hercules died at a local hospital. The statement posted on social media did not specify when Tompkins was pronounced dead.

No arrests have been made and there's no word on motive. Authorities say they found two guns at the Orinda scene.

No arrests. No motive. That says volumes.

"House Party" is quickly entering the lexicon of euphemisms for black or mestizo violence along with "teens" and "youths". White and Asian kids have parties too, they just don't end up in gunfire with such regularity.

Large crowds plus liquor and weed plus diversity = mass shootings that the media downplays.
Posted by Arthur Sido at 9:44 AM