We endlessly hear about the scourge of "gun violence" in America. Whenever there is a shooting in the typical settings with the usual suspects committing the act and the usual victims getting killed, all the talk is about doing something about the senseless "gun violence" problem in America. Now, in the rare cases when the shooter is a white guy, we don't hear about "gun violence", we hear about "white supremacist terrorism". Even normally one-trick-pony Andrew "Free Money" Yang decided to engage in some obligatory white-hating in the last debate and tweeted this out. 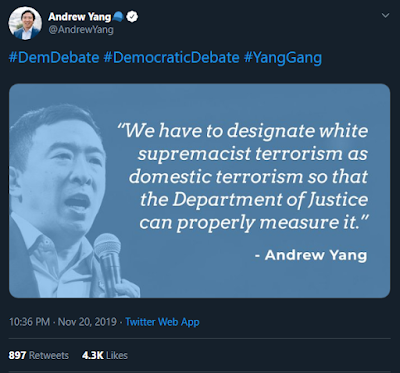 Yes Andrew, even though by any measure you are in essentially no danger from "white supremacist terrorism", by all means push to designate "white supremacist terrorism" as a legitimate concern as a way to weaponize the Federal government to further suppress legitimate white speech. By the way, if you are talking about being dissident right and supporting this guy so you can get free money to live in your mom's basement, smoke weed and tweet edgy memes, please stop pretending you care about our people.

The lastest story I saw about gun violence had to do with the murder of a young, 10 year old black boy, Micah "Dew" Tennant. Micah was caught in the cross-fire of a shooting at a high school football game in the ironically named Pleasantville, New Jersey. The story is full of the usual stuff, talking about a GoFundMe page and of course the obligatory statement from public officials:

Lamont O. Repollet, the state's education commissioner, said the slaying "demonstrates the need for us as school leaders, and as a state, to take action against the gun violence that is plaguing our communities."

To the self-appointed elites in America, gun violence is some sort of supernatural, malevolent force that causes people to die of gunshot wounds with no explanation other than "guns bad". "Gun violence" swoops around America like the angel of death in the story of the Exodus, smiting aspiring doctors and engineers with lethal gunshot wounds before disappearing without a trace, only to strike again somewhere else.

As no one can pin down what exactly is happening here, the obvious only solution is to ban guns lest they become self-aware and start committing "gun violence". But a careful reader of this story, or even a pretty casual and barely literate reader, might notice that there seems to be something familiar here.

The accused shooter is one Alvin Wyatt. While all of the Alvin's I know are Amish, Mr. Wyatt is clearly not. 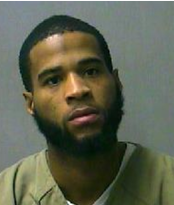 Alvin Wyatt was apparently coming to this game specifically to seek out one Ibn Abdullah. I don't know anyone named "Ibn" nor with the last name "Abdullah" but I am pretty sure I can guess his race (hint: not white). Ibn knew Alvin and fingered him as the shooter, and the story also tells us that the shooting is believed to have stemmed from a prior dispute in Atlantic City. As the story goes, Mr. Wyatt heard that Mr. Abdullah was at this high school football game, and as any rational person does with that information, he headed to a crowded public venue with lots of children and teens present, with a gun, apparently intending to kill Mr. Abdullah.

The plot thickens. From the above linked story:

Weapons charges also have been filed against four men who fled the game and who are believed to be connected to the shooting, the prosecutor's office said.

One of those men — Shadid Dixon, 27, of Atlantic City — told investigators he alerted Wyatt to Abdullah's presence at the game during a Facetime chat, according to a probable cause statement for Dixon's arrest.

Another of the four men, 28-year-old Tyrell Dorn of Atlantic City, told investigators he threw a gun from the car during a police pursuit from Absecon into Atlantic City.

Abdullah, the shooting victim, also was charged with a weapons offense after police found a gun in his waistband, according to a probable cause statement for his arrest.

It said Abdullah was not allowed to possess a weapon due to a prior conviction for aggravated assault.

So let's break it on down here. Two black men, Mr. Abdullah and Mr. Wyatt, get into some kind of beef in Atlantic City. Later, and I am not sure how much later, Shadid Dixon, safely assuming he is black, found out that Mr. Abdullah was at the football game. He then used the Facetime app to tell Mr. Wyatt of Mr. Abdullah's presence at a football game (as a side-note, I doubt anyone will try to ban Facetime over this but if they had used Gab?). Mr. Wyatt rounds up four of his homies, at least two of which and almost certainly all four of which are black, to go this game in pursuit of Mr. Abdullah. All five are apparently carrying weapons. Mr. Wyatt shoots Mr. Abdullah and because it is crowded and he is a terrible shot, he does manage to wound Mr. Abdullah but he also hits a 15 year by-stander and kills a 10-year old boy. Mr. Abdullah, one of the "victims" and also the intended target was taken to the hospital but, oops, he also was carrying a gun to a football game that he was legally prohibited from having due to a prior felony conviction and gets arrested right after getting shot. I am baffled how someone legally prohibited from owning a gun ended up having one anyway, what a conundrum! Mr. Wyatt, being some sort of criminal genius, immediately ditched the gun he just shot three people with, covered with his fingerprints, rightly assuming that the last place the cops would look for evidence would be at the scene of a shooting.

The situation here is not of a mystical force called "gun violence", it is just garden variety black on black violence that so often stems from a minor dispute that escalates into gunfire and involves by-standers getting shot. The "gun violence" problem in America is mostly a "minority violence" problem, concentrated disproportionately in the black and mestizo community, often involving gangs and just as often involving illegal handguns.

No one will say this because on the "conservative" side, most of the prominent voices are terrified of being called "racist", and on the "liberal" side, pointing out that gun violence is mostly a black thing doesn't help create the resentment towards whites Democrats need to get minority votes.

So instead of asking the hard questions, we will just keep pretending in a non-corporeal malevolent angel of death called "gun violence" that snatches away lives with no discernible pattern. That doesn't solve any problems but it makes people feel better and avoid the truth.
Posted by Arthur Sido at 3:41 PM