Why Do Sane People Live In California?

Between 2001 and 2002 I was working in the financial services business at one of the largest firms in the world. My job was managing retirement plans for small to mid-sized clients ($5-25 million in assets) and my book of business was almost all in California. That necessitated a lot of trips to California to play nice with the clients. That was usually pretty cool. I stayed in our preferred hotels, which in L.A. was the Ritz-Carlton Marina del Rey and in San Fran was also the Ritz-Carlton. I wasn't supposed to spend more than $50 on meals. Per meal. Life was good.

California was very different from where I was flying from in the Midwest. It was usually much warmer and sunnier. Even eating at Applebees in L.A. means that your waitress looked like a movie starlet. I stayed at a different hotel north of L.A. one time and after my meetings I went down to the pool to sit in the hot tub to relax and after I settled in a crowd of what looked like extras from Baywatch came down. The girls were all gorgeous and, um, filled out their swimsuits. The guys were all chiseled like Greek gods. I quietly went back up to my room.

One other major feature. The people were all crazy.

I think it is the nice weather. Humans aren't supposed to live where it is sunny and nice every single day. All the sunshine bakes their brains. You are supposed to have days of crappy weather where you just stay inside and drink hot chocolate and read, otherwise you melt down.

How else can you explain this?

Ten special agents from the California Department of Justice were watching as a man walked out of the Big Reno Show and placed his purchases in his car.

The black Isuzu with California plates headed west on Interstate 80 into the Sierra Nevada, eventually crossing the Nevada state line. That’s when the California Highway Patrol pulled Vincent Huey over. Inside the vehicle, state Justice Department agents found 18 high-capacity magazines, some capable of holding 30 rounds, according to court records.

Yes you read that correctly. California sends law enforcement agents to neighboring states to spy on California residents making purchases in those states and then arrests them on returning to California. The guy wasn't smuggling drugs or illegal fully automatic rifles. No, he probably had a few 30 round PMAGs and some standard capacity handgun magazines. 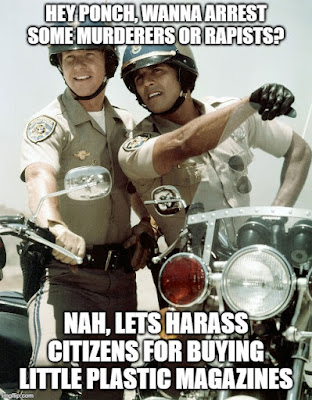 A "high capacity" magazine that holds 30 rounds comes standard with almost every AR sold in sane parts of the country. They are available for mail order to the vast majority of Americans in almost all of the country. They are inexpensive and very common, and without an AR (or AK or Mini-14...) they are useless. There are probably 50 million of them in the country, mostly held legally.

Still you get California law enforcement conducting surreptitious surveillance on California residents shopping in neighboring states and then lying in wait for them to cross the border so they can be arrested for possessing some plastic magazines for the most popular rifle sold in America.

This story was obviously penned by someone working in conjunction with the government to have a chilling effect on Californians who are thinking about going to Nevada to shop for common firearms related items, making them think that Ponch and Jon are lurking behind the "Welcome To California" sign to pull them over with the illicit firearms accessory. Of course this also serves as a warning to actual criminals who will take very simple additional precautions to avoid being caught. 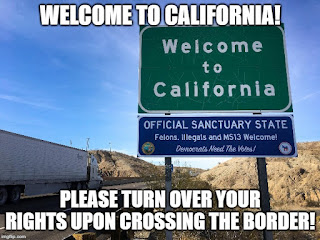 Meanwhile in California diversity proves it is the gift that keeps on giving.

Motive and ID unknown. That is a dead giveaway who the shooter is not and who the victims are. Pretty minimal national news coverage of yet another mass shooting that doesn't appear to involve white men. Go figure.

The cops could be investigating stuff like that but according to the L.A. Times they are too busy stalking California residents shopping in Nevada. In California a person with a standard size magazine for a sporting rifle is apparently a greater threat than the people murdering, raping and robbing Californians.

I don't care how nice the weather is, or how hot the girls are, or how much you love surfing or how great your job is. There is no reason for any sane person to live in that state.

California: If the wildfires, earthquakes and diversity doesn't kill you, the government will.