Last night there was what should by any measure be considered a "mass shooting" in Texas, fairly near Texas A&M university. The news should be front page all across the fruited plains...

At least two people were killed and more than a dozen others were injured at an off-campus Texas A&M University-Commerce homecoming party Saturday, officials said.

Investigators first responded to The Party Venue in Greenville, located roughly 15 miles southwest of the school's Commerce campus, around 11:30 p.m. following complaints about cars parked on the shoulder of Highway 380 outside.

Deputies on scene heard gunshots coming from the back of the building, Hunt County Sheriff Randy Meeks told reporters Sunday. Meeks said he believes more than 750 people were in attendance at the "small structure" venue, and "when shots were fired, it was complete chaos as people fled for safety and deputies attempted to locate the shooter."

16 people shot?! That should be huge news. When there was a mass shooting in Dayton in August of this year and 17 people were shot, it was huge and dominated the news for days. This story is already starting to fade into the background. In fact, the police aren't even sure it was a mass shooting.

16 people shot. Two dead. Not considering it a mass shooting at this time.

Some other clues are starting to emerge about the non-mass mass shooting.

Uncooperative witnesses you say? At a party with an estimated 750 people, ain't nobody seen nuttin'? Curious. Some of that  "snitches get stitches" and "taking care of business our own selves" mentality? 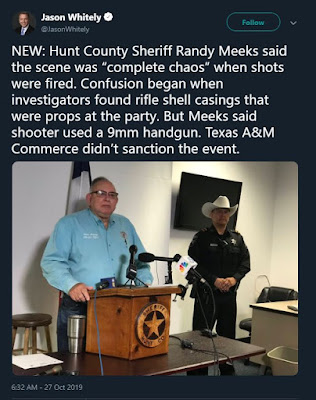 Initially this Jason guy, who granted was reporting on something in the middle of the night, said the shooter used a ".227" caliber rifle, which I don't think exists outside of some exotic collections. I assume he meant a .223 rifle, in other words an AR. Turns out the rifle casings were "props at the party" and the shooter used the more common 9mm, probably a Hi-Point, Canik or Taurus you can get cheaply. What sort of Halloween/homecoming party includes rifle shell casings as a prop?

Turns out we have an answer to that question as well. This off-campus party at a small venue, very descriptively and unimaginatively called The Party Venue, was apparently sponsored by a fraternity, one with a very specific membership. The facility is in the middle of nowhere and looks like it would comfortably hold maybe 100 people. Not 750.

The party was announced back on October 4th by SuaveGuy_Damo I am not sure what he means by going coo coo for coco puffs or that the Nupes coming but I am sure it involves some good clean fun. In case you can't quite make out the picture on the right, I enlarged it for you. 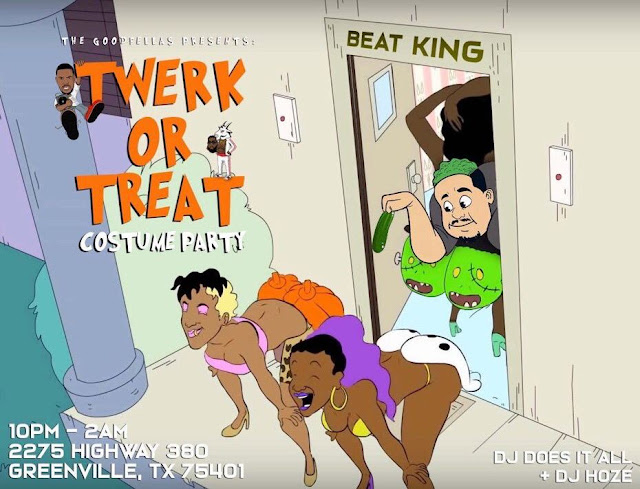 There seems to be a very subtle suggestive nature to this photo. The pickle in particular seems to carry some significance. Not sure what it is but I imagine that "DJ Does It All" and "DJ Hoze" could explain it to me. Kids in college do stuff like this all the time but only when certain demographics get together does it end in gunfire so often.

OK, I think you get the picture. No suspect description, no leads, no known motivation, used a 9mm handgun, happened at a party organized by Kappa Alpha Psi with the subtle name "Twerk Or Treat". This is almost certainly a case of a black guy shooting up a party full of other black folk. It is unlikely anyone will be arrested but there is a decent chance a retaliatory shooting will happen within the week.

What is also true is that if I am correct, this story will never gain any traction and will disappear down the memory hole faster than the Jeffery Epstein "suicide". You can't use it to make the case for "red flag laws" or banning "assault weapons" so the story is useless to the media.

What this means for those late to the party is that once again the media and government is playing word games. A black guy shoots up a party full of black people, killing two and wounding 14 (nice shootin' Tex) but shooting 16 people in a single event isn't a "mass shooting". If a white guy had shot 6 blacks it would definitely get labeled a mass shooting, we would know his name and his motivation. Mass shooting is now a meaningless term like "racism" because it is used selectively when there is an agenda to be advanced.

The media, the entertainment world, academics, government bureaucrats. None of them give a crap about gun violence, they only care about disarming normal Americans so they can proceed with their coup and revolution without interference.

Just in case you weren't paying attention.
Posted by Arthur Sido at 12:56 PM