The Extinction Of The Liberal Intellectual

Way back in the now-utopian seeming days of the early 90s, I was in college at the protoypical midwest university, Bowling Green State. Set in a town surrounded on all sides by corn fields and home to the National Tractor Pulling Championships, BGSU is home to around 20,000 students. Not quite Big Ten sized but a decent sized school nevertheless. Being a short drive from where I went to high school, the campus was full of people I went to school with as a teen and was very upper Midwest culturally. Lots of kids from working class union families and farms and small towns. When I went there it was overwhelmingly white and I am guessing that is the same today even though BGSU has a "Chief Diversity and Belonging" officer. What the actual eff is "belonging"?

Anyway, as a young whippersnapper (who was already married and had two kids) I found myself in the very common for those times position of being a conservative kid in a school with a liberal faculty. Things were a lot simpler back then. Rush Limbaugh was edgy and new, I could still listen to NPR on the way to school without every story being about Trump. At least on the surface politics was still about stuff other than racial identity. Fags weren't getting "married", trannies were still relegated to the shadows where normal people didn't have to see them and the college girls were all feminists but still prowling for husbands.

Most of the student body was politically ambivalent, they were there to get a degree and get out so they could get a good job. There were a few wannabe radicals and people like me in the college Republicans club but most of the students stayed clear of overt political activism. The exception was the editorial pages of the school paper. There were a couple of regular opinion columnists posting predictable liberal drivel and me being me, I regularly sent letters to the editor refuting what they wrote. Kind of like slow motion trolling since it would be days later when my letters to the editor were printed. After a while, the editor of the paper invited me to write my own weekly column which I was happy to do, and I in turn got pretty nasty response letters. A few of my Poli Sci professors read my columns and would mention what I wrote in class. Obviously the editors of the school paper disagreed with my positions but they gave me an outlet to express a different opinion. In one of my more snarky columns I suggested that the pseudo-intellectual liberal elites would one day be extinct. How right I was.

That was then. Today? Even the far milder positions I held back then wouldn't be given a voice and the stuff I write now would probably get me expelled in the first week of class.

It marks a major change in liberal political discourse. When I was a student, liberals assumed they held the intellectual as well as moral high ground. Liberals used to love arguing their position, their righteous indignation spilling forth in a flood. Hell, you couldn't get them to shut up, always yammering about the working man and stuff. Their arguments were facile and flimsy but at least they made an argument and engaged in debate.

In the modern era that has all shifted drastically. The average liberal/progressive/Democratic Socialist/whatever the heck they are calling themselves has no interest in engaging in the public sphere. They don't want to present their case and refute their opponents, they would prefer to burn their opponents at the stake but as that is illegal (for now) they settle for silencing and censoring them. The once haughty liberal intellectual class are now snitches and cyber-assassins. People on social media boast of trawling the web looking for bad thinkers, reporting them for no reason and then celebrating when people get deplatformed as if they won some sort of great victory. Most liberals today are the same sort of people who used to inform on their neighbors to the Stasi and watch smugly from their apartment when their neighbor was hauled away in the middle of the night.

This is the result of liberalism transforming from a political movement into a religious movement. The average liberal today is as intractable and unthinking as a King James Only primitive Baptist. In place of "God said it, I believe it, that settles it!", you have "I saw it on Twitter, it made me feelz, if you disagree you're a Nazi!". They are not simply unwilling to debate the issues, they are incapable of debate. They have been conditioned, brainwashed, into believing whatever new leftist dogma they are told to believe. These are not simply positions they hold, they are part of their sense of self and to question a position they hold is to attack them as a person. Their reactions are visceral. 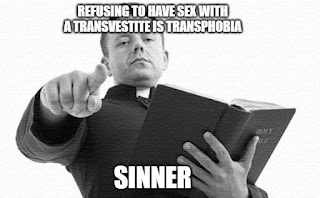 I used to spend (way too much) time arguing with people about theology online. Some people you could have reasonable discussions with. Many people you could not. I mentioned the King James Only types but others were just as bad, especially the various cultic groups from Mormons to some of the more...exotic...cults. Arguing with them was a lot like arguing with contemporary progressives. I eventually stopped messing with one group of cultists because I suspected they were crazy enough to come after me in the real world. A lot of "liberals" are the same way: Anyone that disagrees with them is a Nazi -->> Nazis are bad -->> therefore you should kill them and their families. In a lot of cases, saying something that unsettles them or makes them question their dogma is so upsetting that it is "triggering", ergo it is "violence". You said something I didn't like so that justifies me sucker punching you with a bike lock.

Modern progressive acolytes are the intended end result of an "education" system that suppresses free thought and the natural inquisitiveness of heritage Americans, replacing it with quasi-religious conditioning and conformity of opinion. People don't think because they have been taught to not think and instead to focus on rote memorization and regurgitation. No matter how silly or demonstrably false your statement, I am supposed to just accept it and especially if the person saying it is in one of the many protected classes in America. Case in point from Professor Hasan Kwame Jeffries from "The" Ohio State University, perhaps the most undeserved and pretentious affectation in the American university world. I attended OSU as a freshman before transferring and academically at the undergrad level it was barely a step above a community college. 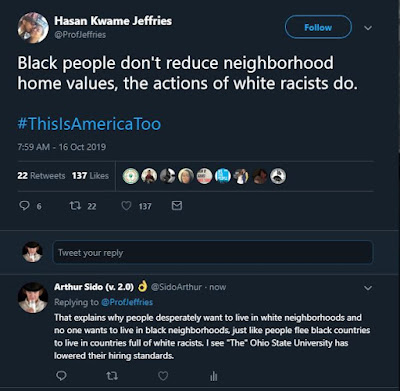 Mr. Jeffries didn't care for my semi-serious, mostly trolling response, so like he did with everyone else that pushed back on his ridiculous assertion, he blocked me.

Mr. Jeffries is an associate professor of history at Ohio State and you will be shocked to find that his specialty is...well, read for yourself.

After time well spent in the “Heart of Dixie,” Hasan crossed the Ohio River and joined the faculty at The Ohio State University in the history department. Since arriving at Ohio State, Hasan has taught graduate and undergraduate seminars on the Civil Rights and Black Power Movement, and surveys in African American and American history.

So mostly seminars and survey classes. Not an academic heavyweight from all appearances.

As a side note, this guy with the twitter username of "@profjeffries" is the latest proof of my operating assumption that people who feel the need to put "Dr" or "Professor" or "Reverend" or "Pastor" in their social media usernames or handles are incredibly insecure in their own credentials and that their insecurity is justified. My dad is a doctor and people who didn't know that called him Mr. Sido all the time and he never, ever corrected them because he didn't need to be fawned over to be secure in his credentials. A guy who has to scream "I'm a professor!" or just as bad "I wrote a book!" is probably someone with very weak intellectual foundations so they rely on inflated credentialing to make themselves seem smarter than they are.

It is an all too infrequently commented on truth that in spite of people having access to essentially the entirety of human knowledge while sitting on the toilet, people today are incredibly ignorant. To compound the problem, they are ignorant of being ignorant. A corollary to that is that we have replaced education with conditioning. Someone who is educated knows how to learn and adapt mentally, someone who is conditioned can only respond with what they have conditioned to know. When confronted by someone challenging their conditioning, they begin to short-circuit mentally.

The responses to pushback are predictable. The first is name-calling and it is as boring and unimaginative as can be. A thought-criminal is a "racist" or "Nazi" or "white supremacist" or my personal favorite "Russian bot". When people suggest that I am a Russian bot and I point out that I use my real name and location, and you easily see my social media history trail dating back to the beginning of social media, they usually take the second response and block me. In general they can't get past the first retort. If calling me a racist doesn't work, they don't know what to do. White men in America are supposed to wither  and curl up into a ball when called a racist and a white man that doesn't respond that way causes confusion.

Decades of conditioning has resulted in a once proud liberal intellectual class that is now incapable of defending even their most basic assertions. It is kind of sad, while they were wrong as could be, it was fun to engage in debate with people who truly believed passionately and intelligently about real issues. It helped me hone my own positions by being forced to refute them and defend my own beliefs. That is how everyone gets a little smarter. Instead of that, we have the social media secret police lurking about looking for people to mass report.

Rest in peace pseudo-intellectual liberals, you were fun to debate.
Posted by Arthur Sido at 11:57 AM