Michelle Obama, the husband of former President Barack Obama, decided to offer his her opinion on "white flight" at a recent "Obama Foundation Summit" ("Foundation" is a code word for "money laundering slush fund"):

Former first lady Michelle Obama recalled her dawning awareness about white flight after her family moved to 74th and Euclid when she was a youth, speaking Tuesday about growing up on the South Side during an Obama Summit session with her older brother, Craig Robinson.

“We were doing everything we were supposed to do — and better,” she said as she discussed witnessing a painful chapter in Chicago’s history. “But when we moved in, white families moved out.”

She added, “I want to remind white folks that y’all were running from us. And you’re still running,” Obama said, comparing the situation to what immigrant families arrive in neighborhoods are experiencing today.

No one seems to ask this question: since we built this nation and the cities across the fruited plain, maybe we can decide for ourselves where we live and not have to ask permission to move into an area nor beg forgiveness for moving out.

Nor did Mr. Obama address this elephant in the room:

When the Robinson’s settled on Euclid, Obama had friends from all races. “There were no gang fights, there were no territorial battles. Yet one by one, they packed their bags and they ran from us. And they left communities in shambles,” with subsequent disinvestment in schools and parks.

So when the white families moved out and left black families in place, the neighborhoods fell apart. Weird that the diversity that is supposed to be our greatest strength invariably leads to neighborhoods going to crap when that diversity hits critical mass. Why is that? I doubt Michelle brought this up.

Why do successful black families mimic whites and move out of black neighborhoods and into white neighborhoods as soon as they get the chance? If living with blacks is so awesome, why did Mr. and Mr. Obama buy a $15 million estate on Martha's Vineyard in a town that is over 93% white and less than 2% black? Wouldn't it send a great message if they lived in a majority black neighborhood in Chicago or Baltimore? Why did they send their daughters to an exclusive private school that seems to be full of mostly white, Jewish and Asian kids? Did anyone ask Michelle about that? 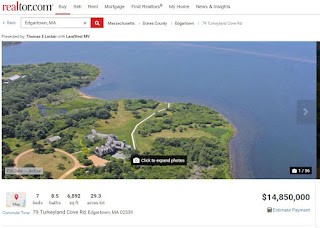 Did anyone ask Mr. Obama why white people "flee" when their neighborhoods get more "diverse", in other words less white? At least when the diversity is black or mestizo, no one flees because of too many East Asians. Could it be that criminality seems to follow diversity wherever it shows up? Did anyone ask why white people would want to live in neighborhoods with schools that get worse among people who commit over half a million violent crimes against white people in a given year? Nah, it must be "racism".

The only sane course of action is to do what I do and stop caring at all about being called names. I don't care what Michelle Obama thinks about literally any topic. His her only claim to fame and the reason why he she is insanely wealthy and given endless coverage by a fawning media is that he she married Barack Obama and was artificially inseminated with his(?) children.

Maybe direct some of that bellowing at your own people Michelle. Maybe start to ask why white people move out when blacks or mestizos hit a critical mass in a neighborhood. You already know the answer. Ponder why you won't talk about it while sipping coffee in your lily-white neighborhood on Martha's Vineyard.
Posted by Arthur Sido at 8:42 AM