The other day I wrote about the case of Kaleb James Cole and the Atomwaffen Group, a group which along with many others I assume is mostly a fed LEO operation to entrap people into committing crimes: Red Flag Laws Are Just The Beginning. We are more and more seeing thought being criminalized to the point that holding the "wrong" opinions is conflated with committing an actual crime. The assumption is that if you hold the wrong sort of opinions, you are automatically suspected of crimes that have not occurred. A little more of Minority Report coming to life. 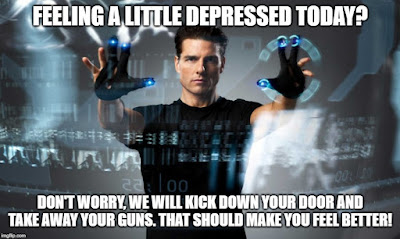 In the latest episode of this, House Democrats are demanding "far-right" groups overseas be branded as "Foreign Terror Organizations", in spite of not committing any actual, for lack of better word, "terrorism".

In response to the growing global threat of white nationalist terror, House Democrats are calling on the U.S. State Department to add three international far-right groups to its list of “Foreign Terror Organizations.”

This is significant: Since 9/11 the State Department’s terror designation system has been overwhelmingly focused on the threat posed by jihadi extremism, like al-Qaeda and ISIS. Adding international far-right groups to their list could give federal prosecutors more tools to go after radicals suspected of conspiring with those organizations before an attack happens.

On Wednesday, New York Rep. Max Rose, who chairs the counterterrorism subcommittee, submitted a letter to the State Department, co-signed by 39 members of Congress. It urged the department to designate Azov Battalion (a far-right paramilitary regiment in Ukraine), National Action (a neo-Nazi group based in the U.K.), and Nordic Resistance Movement (a neo-Nazi network from Scandinavia) as terrorist organizations.

Boy, it is strange that the terror designation system has focused since 3000 Americans were killed, ostensibly by Muslim jihadists, on....Muslim jihadists. Right after the Christchurch shooting, there was an enormous targeted terror attack on Sri Lankan Christians by Muslim jihadi that killed far more people, and that attack was one of the seemingly endless string of Muslim terror attacks around the world. No one seems to care. Muslim terror is so commonplace that it has become background noise, just like "urban" gun violence is so common no one bothers to report on it. Now that I mention it, there seems to be a common theme here of downplaying or outright ignoring the far more common violence from non-whites and instead focusing on the relatively rare violence, or in this case the alleged potential for violence, from whites.

Not to mention, why are we wasting time and effort fighting "terrorists" overseas that aren't committing any actual terror and that pose no threat to the U.S. or our allies?

Our government is growing more and more concerned with taking sides in identity politics rather than actually governing. By focusing on the phantom menace of "white supremacy" instead on actual, real problems, the government has declared itself to be actively engaged in fighting the American people.