More On The Mass Shooting That Wasn't

The story yesterday of a mass shooting in Texas at a "Twerk or Treat" party hosted by a black fraternity near Texas A&M would already be gone by this morning (see my post: When Is A Mass Shooting Not A Mass Shooting?) but there was another, completely predictable, addition to the story:

Police were still searching Monday for a suspect in a deadly shooting at an off-campus party in Texas, which drew a Sunday vigil that also saw more shots fired.
----
What happened during the vigil?

Berry's friends and family gathered Sunday evening at a Dallas park to remember their relative and friend when at least one person opened fire.

Dallas police said the shooting stemmed from a "disturbance" at the vigil and that no injuries were reported.

At least one vehicle was struck with bullets as vigil goers ran for cover.

This reminds me of the scene in the movie Colors where Crips did a driveby shooting of a funeral for a slain Blood.

One of those killed (I am hesitating to use the word "victim") has been named while the other has not. Four people are apparently in critical condition. The named individual is 'Kevin Berry, who was known as “Choppaboy Wess.”'

The vigil shooting story also has some choice quotes:

Berry’s uncle, Cloyse Caruthers Jr., told the Morning News his nephew was at the party with friends and was not a Texas A&M-Commerce student.

"I'm more angry than anything," he told the newspaper. "What were they thinking involving innocent people in this mess? He had so much promise."

Berry's mother, Nakima Alexander, told WFAA-TV her son was a father of two and expecting another child.

Not trying to be mean or anything but he really didn't have a lot of promise. Lots of Facebook posts about getting high or going to court or being in prison. Lots of photos with stacks of money and guns. 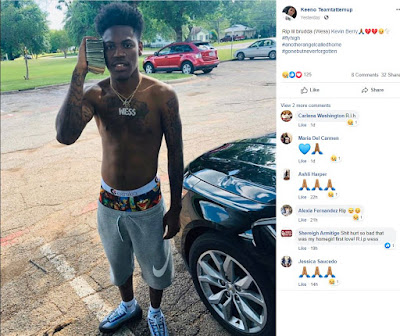 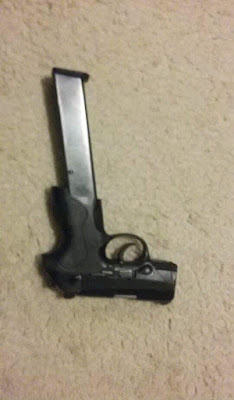 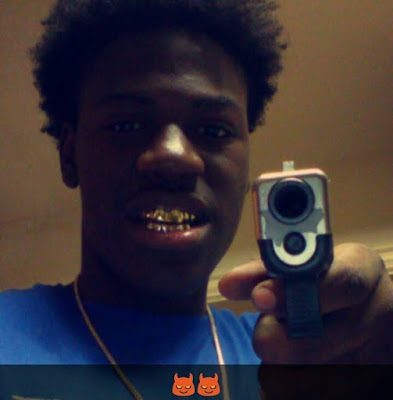 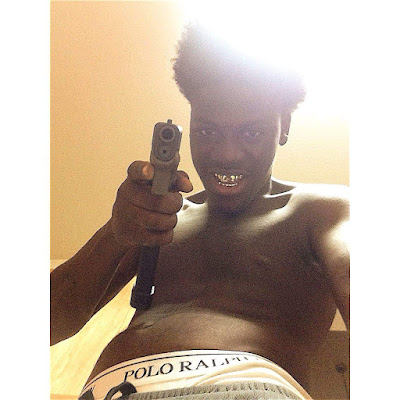 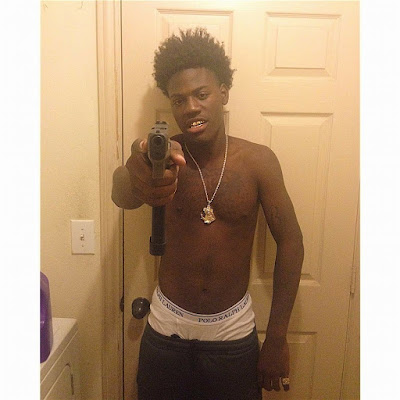 I downloaded these pictures and posts myself from the deceased young man's Facebook page lest you think this isn't him.

Clearly a young man with a great deal of promise. No word on how many different women he fathered the 3 children with.

How did anyone expect this young man's life was going to turn out? Maybe he would have turned his life around but more likely it was going to end up in one of two ways: with him in prison for most of his adult life or dead in a shooting.

Even at a vigil for those shot at the party there was gunfire and not one or two shots. The reporter who was there had video going and not only was there a great deal of gunfire, it sounded like it was from at least three different firearms.

Everyone scattered. My photographer and I headed for the trees and took cover.

I took video once I got safe. We heard DOZENS of gunshots. pic.twitter.com/XDlFTGHemc
— Matt Howerton (@HowertonNews) October 28, 2019

My intent here is not to crap all over this guy now that he is dead. I wouldn't wish this on almost anyone. It is awful that the three kids he fathered will grow up without a father as so many young black kids do, a situation that is one of the most damaging social maladies impacting the black community. The cycle of violence that led to his death and so many other young black men dying leaves shattered families and is an enormous expense on society as a whole. I truly wish that Kevin Berry had some decent male role-models in his life to intervene before he ended up on a path of flashing cash, doing drugs and pointing guns. The same is true with the shooter. Initial police reports indicate that one of the deceased, either Kevin or the as yet unnamed individual, was targeted by the shooter. What makes little sense is that 16 people ended up shot when the shooter was targeting just one.

Having said that, my reason for posting about this again and posting so regularly about similar incidents is to serve as a reminder. When there is a mass shooting and the shooter is a white male and/or involves a scary looking rifle, the media covers it for days on end. We get legislation proposed. Congress holds sham hearings about the "danger" of non-existent threats. The civil rights of white Americans are attacked based on the very rare and isolated incidents of white men committing mass shootings but you will wait in vain for Jerry Nadler to hold a committee hearing on young black men committing over 55% of all murders in America. It is the typical tactic of focusing on a phantom menace that advances the Left's political agenda and completely ignoring the actual problems.

It is very unlikely that anyone will be arrested in the Twerk or Treat shootings or in the subsequent spraying of bullets at the vigil. Most likely a number of people involved already know who the shooters are and plan on taking care of retaliation on their own. That means more young black men dead, more bystanders killed or wounded, more weeping mothers, more kids without fathers. More young black men in prison ruining any future they might have had, leaving them nowhere to turn but a life of crime and/or dependency.

As a society we refuse to address the real issues and instead focus on boogeymen. The result is a very expensive bill that is going to come due soon. When it does, we will all be paying for our refusal to speak the truth.
Posted by Arthur Sido at 10:18 AM