In Today's Episode Of "Welcome To Your Future"....

Let's give a warm welcome to Marilyn, Tonacia and Taneshia! They decided that in lieu of bingo, what elderly dementia patients really crave for keeping active is to be part of a fight club! 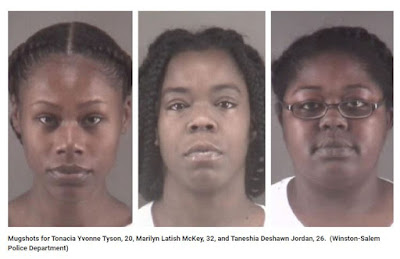 Three employees at a North Carolina assisted living facility were arrested after police said they ran a fight club with elderly residents with dementia battling it out against each out.

The women were accused in court documents of watching, filming and even encouraging a fight between a 70-year-old woman and a 73-year-old woman at the Danby House assisted living and memory-care facility in Winston-Salem, Fox 8 High Point and other local media reported.

Marilyn Latish McKey, 32, Tonacia Yvonne Tyson, 20, and Taneshia Deshawn Jordan, 26, were each charged with assaulting disabled persons, according to the reports.

What a delightful trio! You can rest well tonight knowing that your future is being "cared for" by compassionate professionals like these three.
Posted by Arthur Sido at 9:49 PM