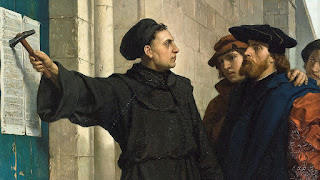 
October 31st, 1517 marks the unofficial start of the Protestant Reformation when Martin Luther, the German monk not the plagiarizing adulterous commie, nailed his 95 Theses to the door of the church building in Wittenberg. The world and especially Europe was never the same, for better or for worse, as the stranglehold of Rome over Christendom was broken. We haven't done Halloween as a family for a long time but we used to recognize October 31st as Reformation Day (see my post on the 500th anniversary: The Protestant Reformation At 500: So Much Recovered, So Much More To Reform ). Not so much these days but I had some thoughts nevertheless.

While my faith journey has had many a twist and turn, it has never so much as dipped a toe in the Tiber. Even though my extended family is culturally Catholic as is my wife's, and we were married in a Catholic church by a Roman priest, the "smells and bells" never had any appeal to me. The rigid and inflexible hierarchy, the doctrines that sprang forth from whichever "Pope" thought them up, the endless appeals for money, the always vaguely creepy priests, the maudlin statues. Nah, that is a hard pass from me. 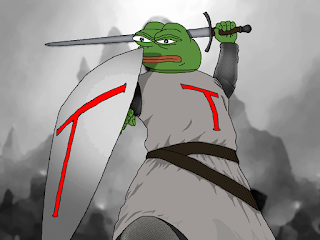 Rome embodies everything I loathe about institutionalized religion. In a world that is rapidly moving away from organized religion in general, Roman Catholicism seems like a hopelessly outdated and irrelevant relic from the past. Still, many young people in the dissident movement are turning to Rome to fill a void in their spirit. Why would people posting Pepe and Honkler memes one moment be posting about Deus Volt the next?

I get why young men and young women alike are drawn to the TradCath thing. We live in a world with nothing transcendent, nothing beyond shallow materialistic consumption and vacuous entertainment. For young men a world with no prospect for marriage and family is depressing. Who wants to live your life in the basement playing video games? For young women it is even worse as the world they are supposed to embrace works ferociously to deny them what biology makes them crave: home and hearth, husband and children. A future of boxed wine and cats until you end up in a nursing home to be mistreated and die alone isn't very appealing.

Most of what passes for Christianity today isn't much better. The Christian faith has always been overwhelmingly cultural in America but at least it provided a stable structure. You were married and buried in church, you lived in general harmony in theory if not practice with the Ten Commandments, Christmas and Easter were about more than buying stuff. At the very least you knew what the churches stood for. Today you get women badgering men about the "patriarchy" in a faith that has always been patriarchal. You have open homosexuals and foul mouthed, tattooed divorced women "pastors". You have a seminary sponsoring an event where people apologize to a bunch of house plants for being inhumane to vegetation. Meanwhile Rome has looked the other way for a long time at the flood of open homosexuals in the priesthood and then acted shocked when sexual deviants turned out to be molesting boys while the church hierarchy covered the whole thing up. The various Orthodox groups seem better off but there really aren't many of them and their practices seem alien and weird. The mormon church is shifting positions like a weather vane in a tornado in a desperate attempt to keep people from leaving. I guess the Amish are doing well but there aren't that many of them and they are fighting a constant battle against modernity.

So sure, young people searching for meaning and tradition to anchor themselves in a world gone insane are turning to the most traditional form of our traditional religious faith. Other young people are seeking out the theonomy/Christian reconstruction path, seeing a theocracy as the curative for a degenerate nation. Still others are going back even farther to European pagan faiths, which is difficult because the word pagan carries such negative, "burn them at the stake", baggage in a society birthed from 1000 years of Christianity stamping out competing faiths.

That is all great and I encourage people to seek a spiritual foundation but I also an very leery of religious wars within the movement dividing us. I have a lengthier post on this topic in the hopper but suffice it to say that we must be very cautious of those who demand fealty to a specific faith tradition as the purity test for being in the movement.

Religion is one of the most important aspects of a people and a society. It also has often been the catalyst for division and weakening of a people. Whether the wars between Catholics and Protestants or the genocidal purging of traditional religion by the Marxist faithful, religion has the potential to undercut all of our efforts. I am quite certain that much of the division is surreptitiously funded by those who want to see us divided and squabbling.

By all means, discover and explore your faith and let it inform who you are and how you live. Just don't let it be a weapon in the hands of our enemies.
Posted by Arthur Sido at 10:06 AM