Following up from the prior post. The man accused of shooting up the Twerk or Treat party, Brandon Ray Gonzales, was interviewed by a local news station, which seems like a terrible idea if you are in jail on capital murder charges but whatever. He claims he didn't do it, as they all do, but he claims he was in a car with witnesses when the shooting happened.

While Brandon Gonzales admits he was at a party where two people were killed in a shooting, he says he was outside in a car when the gunfire broke out.

What is interesting to note is that he was wearing a bulletproof vest as part of his costume with no plates in the vest.

Also interesting to note, he has no criminal record other than a "minor traffic incident". Not exactly the prototypical shooter.

Do they have the wrong guy? Cops say they aren't looking at anyone else but who knows.

Meanwhile there has been an arrest in the shooting at the vigil, a Patrick Lovely, who was speeding away from the location of the vigil after the shooting. That isn't a crime, but he was arrested. 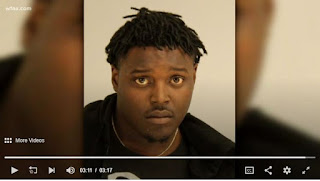 This case just keeps getting weirder and I have less than complete confidence in the police response.
Posted by Arthur Sido at 10:44 AM